Must visit in Chicago

The Windy City, Chicago has got so many places to see but for a full Chicago trip, you must include these three in your list! 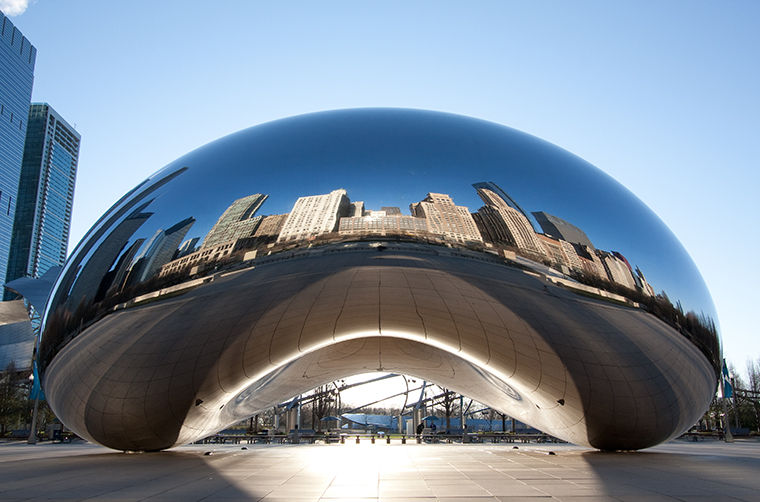 The Cloud Gate situated in the Millennium Park, also referred as The Bean by most of the locals living in Chicago is the icon of the city. Designed by the Indian born, British artist Anish Kapoor, this gigantic sculpture made out of stainless steel is the setting of many people’s memory pictures who paid a visit to Chicago.

The sculpture reflects and distorts the city’s skyline and has become an irrevocable part of the city’s street art. That’d be fair to say that this sculpture works as a tourist magnet. It has been long time now since it got its place among the souvenirs of Chicago.

Not only because of its beauty and artistic side, the Cloud Gate has also gained this much attraction because of its place, too. It is located in the center of the Millennium Park which is located close to the other must see places in Chicago. In addition, it is not uncommon for locals to get their wedding or celebration photos shot in front of the “The Bean”.

The reflection on the Cloud Gate can best be described as the summary of this beautiful city. It is beautiful both during the day and night, so don’t worry much about making it there in the right time. Bear in mind that it will always be crowded and hundreds of unfamiliar faces will probably be accompanying you in your picture.

Lake Michigan is calling you on Navy Pier! Probably one of the best and most unforgettable places in Chicago, Navy Pier is an area that contributes to the beauty of the Windy City.

From the date it was built, Navy Pier served many different purposes. First it was used as a commercial pier, then as a navy training center, after as a college classroom and finally as a gathering place as it is today. Just as the Cloud Gate, Navy Pier cannot be considered as just a tourist attraction since a lot of locals also make the most out of this beautiful place.

Navy Pier has got many facilities, both indoor and outdoor but it is the best when the weather is warm enough to let you stay outside and enjoy both the place and the view. Although Ferris Wheels tend to be working better for children, forget that when you are in Navy Pier and make that ride to enjoy a unique scenery that encompasses Chicago and its one of a kind beauty.

Navy Pier also hosts a large number of special events throughout the year. If you would like to catch up with a show or see what is going on there in the time you visit the city, you can have a look at the official website of Navy Pier.

Your trip to Chicago is invalid unless you visit the famous Chicago Theatre. Built in 1921, the theatre is still in use and watching a show there is the closest you can get to a time travel to then.

Located on the North State Street in the city, Chicago Theater is one other landmarks that deserves a visit while you are in Chicago. The building is included in the list of National Register of Historic Places and can be considered as the unofficial emblem of the city.

The official website of the Chicago Theatre gives detailed information about the current shows as well as ticket purchasing details.

What to do in Chicago

Must do in Chicago

Must taste in Chicago