Read more about the Scandinavian country Norway, its visa procedure, cuisine, attractions and what the country offers the visitors here. 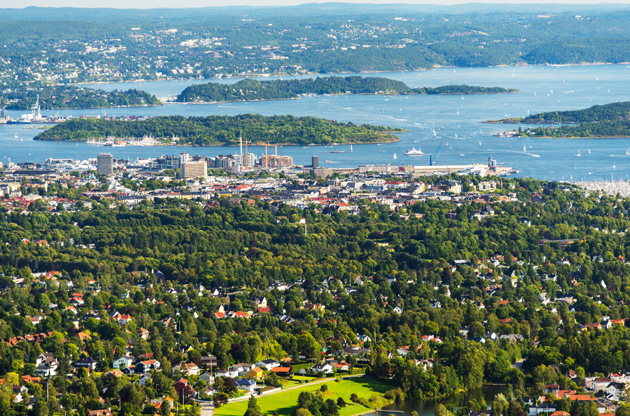 Norway, the fascinating member of Scandinavia, keeps being a dream place in many travelers’ mind. With its one of a kind nature, scenic views and extremely civilized way of life, this country never disappoints the lucky ones who make it there.

Norway has got a population of 5 million and this makes the country one of the least densely populated countries in the world. The residents of Norway enjoy living in seven different regions of the country. The capital Oslo is visited by thousands of tourists every year and the other major cities such as Bergen and Ålesund are still the top destinations for nature lovers.

Saying that, Norway is also the home for the beautiful fjords which are truly breathtaking both in winter and summer. In addition, Norway is one of the best countries to watch the midnight sun. No need to mention the forests and lakes that surrounds the whole country. As rest of the Nordic countries, Norway is also popular as being one of the greenest countries in the world.

The climate in Norway, as you can guess, is cold. Although the temperature differs in the regions of the country, the typical Scandinavian weather welcomes the travelers throughout the year.

The national language of the country is Norwegian. If you know Swedish, Norwegian may sound similar to you. If you don’t know any of the two, don’t be panicked. Typical Scandinavian: Norwegians speak English as good as their mother tongue.

While we keep amazing stories from Norway (foxes getting frozen in the lakes, the prime minister’s disguising as a cab driver and interacting with the citizens) and cannot help admiring it, visiting the country promises to be a different sort of travel experience.

Norway is on western and northern part of Scandinavia, in Northern Europe.

Although it is affected greatly by the modern day influences, the traditional Norwegian cuisine consist of ingredients consumed raw.

Fish constitutes an important part of the cuisine. As sea products are available at their freshest throughout the year thanks to the geographical location of the country, the dishes made from these are highly popular in Norway. Tørrfisk, Lutefisk and the Norwegian Salmon must be on your list to try out while you are in Norway.

Other famous dishes, such as Fenalår, Pinnekjøtt and Fårikål are almost always accompanied by steamed or grilled vegetables.

Norwegian pastry Kjøttkaker is a famous dessert and must be tried out with freshly brewed cup of coffee. If your trip falls within the Christmas time, then consider yourself to be lucky as that is the time for famous Norwegian Christmas desserts and candies.

Aquavit, also known as the Akvavit is the famous Norwegian alcoholic drink. It contains 40% of alcohol and gets its taste from spices and herbs.

Norway has got a lot to offer when it comes to shopping however you should keep in mind that it might not be the most affordable country to do some shopping. Actually, Norway is one of the most expensive countries in Europe.

Your international credit card will be accepted in most of the places in Norway. In addition to the credit card coverage, the ATMs are also abundant in the country.

As the weather of a country influences its industry as well, Norway’s being the best country to buy a couple of knitted sweaters doesn’t come as a surprise. In addition, knitting is a long term tradition in Norway and the handmade ones are the best examples of quality craftsmanship.

Norway is also famous for its beautiful jewelry. Buying watches may also be a good idea in Norway. You can also buy souvenirs such as Norwegian Troll trinkets, pewter, glassware and ceramics.

Norway is one of the countries you shouldn’t worry about not visiting the major cities. This is because in every part of the country you will be able to find an attraction you will be happy to participate. This may be a unique museum tour or hiking in the wild mountains of the country. Whatever that is crossing your mind, I can assure you that Norway has it.

Watching the midnight sun is surely one of the top attractions. This unusual natural phenomenon can best be watched at The North Cape, The Svalbard Islands and The Lofoten Islands.

Of course, the fjords. Well, although Bergen is famous for being the main destination to see these amazing natural treasures, it is not the only place. The Nærøyfjord and Aurlandsfjord, the Lysefjord and the Nordfjord are surely going to mesmerize you with their stunning look.

Skiing is another popular attraction in Norway (you are not surprised, are you?). Holmenkollen in Oslo, Gålå in Gudbrandsdalen and Sjusjøen in Hedmark are the top three places in the country to show off with your skiing talents.

In addition to these, scuba diving (especially in Saltstraumen and Gulen), hiking, cycling and climbing are also among the top attractions in the country. Get the most out of the heaven-like nature while doing your favorite sport in Norway.

One of the countries in the world that every other looks up to, Norway is one of the most chosen countries to hold congresses, fairs, exhibitions, tradeshows, symposiums and conferences too. The convention centers and venues in the country satisfy the needs of the organizers and offers a maximum comfort to the event attendees. Not only the capital Norway, but also Bergen and other major cities are visited by every year thousands of people who come to join an international event.