About United Arab Emirates, this is a detailed tourist guide including smart tips and advices about the restaurants, shopping centers and things to see. 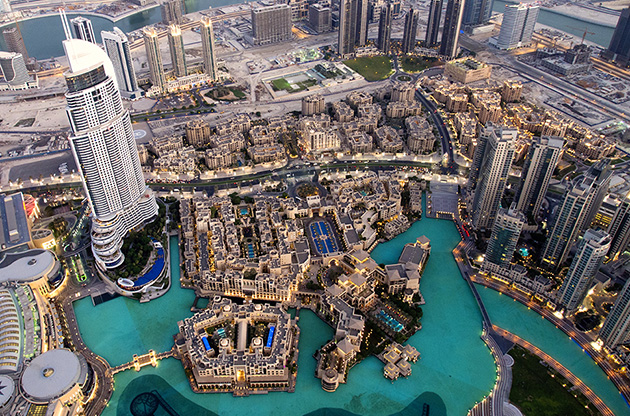 United Arab Emirates rises up from the shifting sands of the arid desert; a proud Arab nation, it stands as the gateway to the long-hidden mysteries of the Middle East. As both an economic powerhouse and a burgeoning tourist destination, United Arab Emirates (commonly referred to as UAE) is regarded as a key player in the international business arena.

The federal capital is Abu Dhabi and this is also the centre of all UAE government-related activities. The largest city in the UAE is the world-renowned tourist destination of Dubai, which boasts a population of approximately 1.1 million people (20% of the total population of UAE). The arid desert that makes up the majority of the country's landscape, has an unconventional beauty, which captures the hearts of those who take the time to appreciate it.

UAE (United Arab Emirates) is divided into seven emirates that are each ruled by an emir or sheikh, which is a title of high office in the Arabic language. The state religion of Islam shapes the cultural and social norms; this should be carefully considered when making any packing or planning decisions, prior to your arrival in this wonderful country.

A wealthy nation, with one of the highest per capita income levels in the world, UAE has both the seventh largest oil reserves and the seventeenth largest natural gas reserves in the world. Its dynamic tourism industry is also a huge part of stimulating the economy. The symbiotic result of this focus on tourism development, is the added benefit to UAE citizens from the prioritised improvement of infrastructure and the core education system.

This influential Middle-Eastern country neighbors Oman, Saudi Arabia and Qatar; with the Persian Gulf stretching along its northern coast and the Gulf of Oman on its north-eastern border.

Things to Do in UAE

The two main cities are Abu Dhabi and Dubai and both continue to draw large numbers of tourists and foreign investors. As a result, these are the two best locations in which to find luxury shopping, fine dining opportunities and an abundance of interesting tourist attractions.

Dubai owns the bulk of famous attractions, like the postcard aerial shots of the Dubai Palm islands. It has blossomed from an unknown, coastal desert city to an internationally recognized metropolis, with the man-made Ski slopes at Ski Dubai, the highest building in the world, the awe-inspiring Burj Khalifa skyscraper.

The beauty of the Jumeirah Mosque has been the inspiration behind many a great artwork and is said to be the most photographed Mosque in Dubai. The drive to modernize this amazing city, has not destroyed the treasured legacies, as shown by the retention of culturally significant treasures like the annual Dhow race and the valuable artefacts held at the Dubai Museum.

Not to be outdone by its neighbour, Abu Dhabi also has its fair share of must-see attractions. Every year, Abu Dhabi hosts the exhilarating Formula One Grand Prix at the impressive Yas Marina Circuit; this also inspired the creation of the interesting Ferrari World Abu Dhabi. The Sheikh Zayed Grand Mosque is an icon of Islamic architecture and highly ranked on the list of sight-seeing destinations.

Truly regarded as a utopia for discerning international shoppers, the UAE boasts a range of opportunities for visitors to unwind with some well-earned retail therapy. From traditional souks to luxury duty-free mega-stores, the sheer variety of products available is sure to make a giant-sized dent in your back pocket. Shoppers come from all over the world to indulge in the luxury of the gold souks, the flashy international brands and the endless variety of products that embody the style and innovation of UAE.

The Arabic cuisine is absolutely delicious. Pork is strictly forbidden for Muslims and the base ingredients found in Arabic cooking are halal; typical meals include lamb, chicken, a selection of breads, herbs and spices, dairy products such as yoghurt and butter and of course, the staple of rice. Although not as spicy as its East Asian counterparts, the cuisine is extremely tasty; an aromatic blend of herbs and spice.

Shisha lounges and restaurants are in abundance, especially in Dubai. Shisha (or sheeshah), the flavoured tobacco, which is usually smoked using a multi stemmed water pipe (hookah), is part of traditional social conventions in Arabic society.

The visa requirements for the UAE vary depending on nationality, purpose and planned duration of your visit. For detailed information, please visit the United Arab Emirates Ministry of Foreign Affairs Website.

United Arab Emirates continues to surprise the outside world with its keen innovation and ability to host sector leading global events such as conferences, summits, congresses, fairs and exhibitions, symposiums and more. Thanks to its over the standards facilities, bedspace and magnificent venues, UAE remains as a number one country among the ideal destinations for business events.