Most recent information about Paraguay, it's cuisine, attractions and way of life. Read more to have the best time during your trip to the beautiful country. 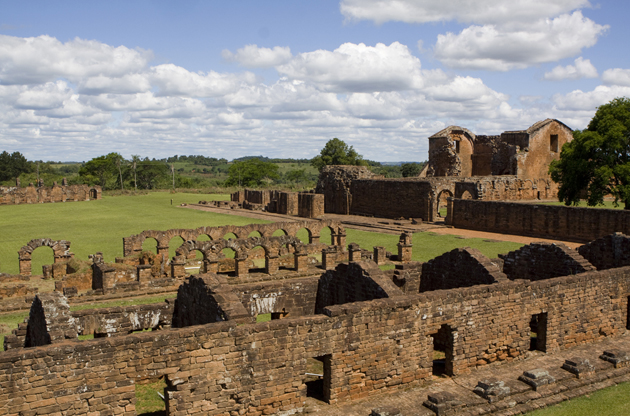 Within the branches of three rivers in South America is located the republic of Paraguay, this tropical region of South America has a population 6.5 million, a third of which reside in the Capital city Asunción.

Paraguayan culture is a peaceful blend of Spanish and Guaraní customs and traditions, and while the main practicing religion is Roman Catholic, 95% of Paraguayans are bilingual – speaking both Spanish and the ancient Guaraní language. This indigenous language and culture remains highly influential across the country. Perhaps English is spoken in the Paraguayan business world, but as a tourist don’t expect to get by without a little Spanish – though you will be forgiven for not knowing a word of Guaraní.

Paraguay is a beautiful place to explore, a great place to holiday, and an inexpensive and culturally rich place to do business. Full of things to see, buy and do, this South American jewel won’t disappoint.

Paraguay is one of the members of the South American countries. It is landlocked however the borders are laying on Paraguay River. The country is neighbored by Argentina, Brazil and Bolivia.

If you’re travelling to Paraguay, make sure you acquire a visa if necessary. While most EU won’t need a visa, US, Canadian, Australian and New Zealand citizens will. You can get one on arrival in Asunción, but if you’re travelling to anywhere else, you will need to come prepared. Double check what is required from you, a Visa can cost anywhere between $100-160.

Paraguay is a generous friend when it comes to offering its visitos a large variety of attractions to choose from. Especially the capital Asunción is the cultural and business center of the country and the travelers enjoy the soul of the city that keeps moving all the time. Nice restaurants, crowded shopping areas and historical places of ineterest contribute to the city's charm.

If you want to get away from Asunción, try visiting Paraguay’s young and lively city of San Bernardino, while the place is steeped in history, there are also some great resorts, party spots, and a popular water sports lake that is bustling with enthusiasts over the summer.

If you’re into history, you can also visit Jesus and Trinidad – here lies Paraguay's best-preserved Jesuit settlement . Indigenous people were concentrated at these sites for religious instruction. With stunning views and amazing sights, it’s been a UNESCO World Heritage Site for 20 years.

And how could you mention Paraguay without paying homage to its most treasure beauty spot – The Iguassu Falls? One of the Seven Wonders of the World, the breath taking falls are steeped in legend - God supposedly sliced the river in rage as his bride-to be fled from him with her lover in a canoe. If you can, stopping at the falls is the chance of a lifetime, and shouldn’t be missed.

If you loved this giant of nature, try visiting colossal manmade attraction - the Itaipu Hydroelectric Dam. The American Society of Civil Engineers insists this is also one of the Seven Wonders of the World. It’s certainly the largest in the world, and its staggering height and size along with tourist information, videos, and tours, make a great day trip.

This pervasive fusion of cultures in Paraguay comes across in the traditional arts such as the production of Paraguayan lace and embroidery. Even the music, played on the traditional native instrument, the harp, speaks of a mixture of influences. Paraguayan people pride themselves on their fine craftsmanship, and shopping here can be extremely interesting. Locally produced silver filigree, fine lace, leather goods, and traditional embroidery are all excellent. Ceramics and woven textiles are also cheap, easy to find, and of high quality.

Whether you’re visiting Paraguay for business of pleasure, it’s said to be the cheapest country in the world - the currency is the Guarani (PYG) and prices, in comparison to Euros, Dollars, or British Pounds, are very low.

The native cuisine in Paraguay often includes the yucca-like crop of manioc, and locals are fond of a thick corn bread called ‘sopa paraguaya’. The tropical country is one of the world’s largest exporters of soya beans and beef – which they traditionally cut into strips before drying and curing in the sun.

Another famous product of the country is the green tea Yerba Mate – a healthful caffeine kick, this sweet tea will wake you up and cleanse you all at once.

If you’re in Paraguay for business, it’s important to realise that Paraguayans do tend to arrive late for most things! Give yourself plenty of time to accommodate for people arriving late – this is not considered to be rude or unprofessional. Similarly transport connections and departures can be sluggish and may not be on schedule.

Once you’re in the country, taxis are generally the best way for tourists to get around. They can be expensive however, and have been known to rip off passengers outside of the capital as there are no meters – agree on a fare before you get in!

Paraguay has been a top destination for travellers for quite a long time now but recently, the country is also gaining importance in world's event tourism scene. The cities in the country become the host of many important events throughout the year. The hidden beauty of Paraguay and the distinctive characteristics of the cities turn the country into one of the best places to join an event for the event attendees.