Get ready for your trip to Ecuador by reading the general information about the country, its attractions, cuisines as well with accommodation options. 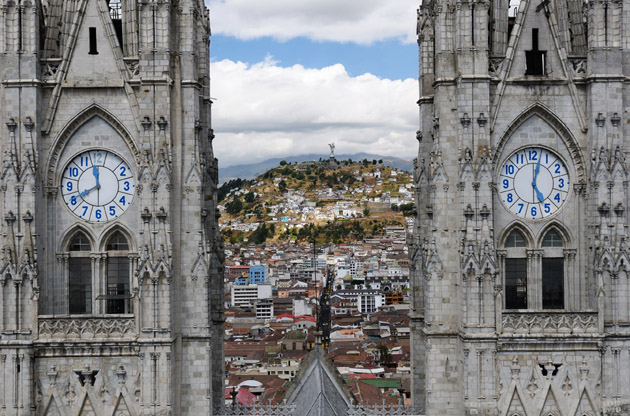 Although it is a small country, Ecuador is one of the most fascinating nations in the world. It is full of exciting natural wonders, like the Galapagos Islands and Cotopaxi, the world's highest volcano, as well as interesting colonial cities like Quito, the capital of Ecuador, and Santa Ana de los Ríos de Cuenca, known simply as Cuenca. Both of these old cities have been designated as World Heritage Sites by UNESCO.

Ecuador is a democratic republic where Spanish is the official spoken language. There are also about a dozen other languages spoken in some of the native communities. Many of these languages date from before the Spanish conquest. The country's population is about 15.5 million, spread in the 4 distinctive areas; La Costa, La Sierra, La Amazonia and La Region Insular.

Ecuador gained its democratic status in 1979. Today the country is ruled by a democratically elected president. In addition to the executive branch of government, there is a legislative branch as well as a judicial branch.

With the visible economical and social improvements Ecuador has been climbing to the tops on the list of the countries to be visited. The exotic aura of the country welcomes the visitors and the historical richness keeps being a source of fascination. Your trip to this amazing country is going to be one of the most soul awekening experiences of your life.

Ecuador is located in northwestern South America. It is bordered on the west by the Pacific Ocean with a coastline of 2337 km; on the northeast by Colombia; and on the east and south by Peru. The equator passes through the country, just north of Quito.

The cuisine of Ecuador varies from region to region. For example, people living along the coast tend to eat plantain, yucca, rice and fish dishes. Ceviche is a cold seafood dish served with fried plantains and popcorn. Encebollado is a fish soup with yucca, marinated vegetables and fried plantains.

In the mountains, potatoes are the staple and are often served at more than one meal during the day. Soup is popular for both lunch and dinner in many parts of the country. Locro de papa is potato soup with avocados and cheese. Cuy is a dish of roasted or fried guinea pig served on a stick.

Breakfast often consists of batidos, which are fruit shakes, and eggs and toast. Empanadas are cheese and/or chicken filled pastries, and are often eaten as snacks in the afternoon. Beverages include tea, coffee, and fruit juice (melon, guava, pineapple, orange, passion fruit, blackberry and watermelon), as well as aguardiente, made from fermented sugar cane.

For visitors looking for local products to take back home as gifts and/or souvenirs, Ecuador offers many choices. Buying hats is a popular idea: these include "Panama" hats, as well as those made for the local indigenous people. Other products include handmade guitars, herbal and beauty products, outdoor wear, woodcarvings, ceramics, jewelry, and other handcrafted products.

Ecuador's Galapagos Islands National Park is one of the most popular tourist destinations in the world. These islands represent yet another World Heritage Site in Ecuador, and are famous for the large number of endemic species that live on or around the volcanic islands. Some of the numerous species include dolphins, land and marine iguanas, sea lions, whales, penguins, frigate birds, albatrosses, flightless cormorant, and the most famous of the Galapagos residents: the Galapagos tortoise. The islands are also home to many kinds of endemic plants.

The main attraction on the mainland is the capital city of Quito, and this is the point of entry into the country for most visitors. This old Spanish colonial city was founded in 1534 and visitors who explore its amazingly well preserved old city center are not surprised by its World Heritage Site status.

Ecuador becomes the host of many international events throughout the year. Especially the capital, Quito, with its convention centers, venues and beautiful hotels is one of the top choices of event organizers. Every year, many important congresses, conferences, symposiums, seminars, fairs and tradeshows are held in the country. The attendees get the opportunity to take part in their desired event and discover the hidden and exotic beauty of this beautiful country.