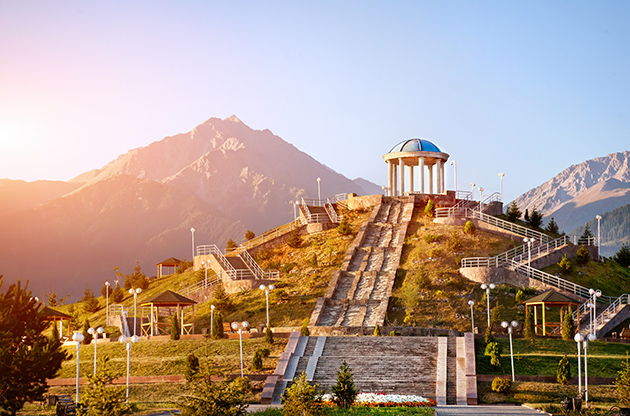 One of the biggest countries in Asia and the 9th biggest in the world, Kazakhstan is a land filled with a lot to learn and discover. Inhabited by the native Kazakh people, who are known to be mixed race of Mongol and Turkic, in as early as the 13th century, Kazakhstan has undergone major changes in terms of administration. The country became a part of the Soviet Union in 1936 until the dissolution of the Union in 1991.

Kazakhstan is the biggest landlocked country in Asia. Turkmenistan, Uzbekistan, Kyrgyzstan, China and Russia are the neighbor countries surrounding the land. The estimated population of Kazakhstan is around 18 million people. The capital city is Astana and the second largest and most popular city is Almaty.

In terms of the difference culture, language and history, Kazakhstan nourishes a traveler who is open to learning. If you haven’t been to Central Asia before, a trip to Kazakhstan will definitely be something unique and new by all means.

The official languages in Kazakhstan are Russian and Kazakh. Tenge is the national currency used in the country and the region has a unique cuisine which has a large number of dishes and desserts that must be included in your list. Getting to know the locals who are known to be one of the most warm-blooded and welcoming people ever will also add pleasure to your trip.

If you are on your way to Kazakhstan for pleasure and exploration, you’ll be glad to get a chance to be a part of this unique culture and will be willing to come back since your time there will never feel like enough. If you are going to Kazakhstan for business, then make sure you have at least a couple of days before going back home because you’ll be fascinated by the one of a kind aura Kazakhstan has.

Kazakhstan is on Asia and is located on the center of the continent. The neighboring countries disables Kazakhstan from having a coast and this is why it is referred as “sandwiched” country.

Kazakhstan’s visa policy varies according to the visitors’ passport nationality. The detailed information about the countries that are exempt from visa to enter Kazakhstan and the other details on how to obtain a visa and types of visas can be found on the official website of Department of Consular Service of the Ministry of Foreifn Affairs of the Republic of Kazakhstan.

Kazakh cuisine is one of the most characteristic ones in the world not only because of the types of ingredients used but also because of the main aim that shaped the cooking ways of those. Being herders back in time, the consumption of meat centered on horse, camel and sheep. In addition to this, because of their nomadic way of life, the most important thing concerning the food was cooking it in such a way that would enable long term preservation. The marks of these can still be seen in the modern Kazakh cuisine.

Of course, the cuisine has also been affected by the other nations’ cuisines that dominated the land back in time or the neighboring ones. The ethnic groups of Russians, Ukrainians, Tatars and Uzbeks have influenced the Kazakh cuisine incontrovertibly.

When you travel to Kazakhstan, there are dishes you should try in order to get an insight of the cuisine. Quwyrdaq is the most famous of these as it is considered to be the national dish of the country. It is a dish made of mutton and onions. Besbarmak is another one which is also a very popular meat dish but it is cooked with horse meat. Other famous dishes in Kazakh cuisine are:

Manti is also very popular in Kazakhstan although it is not originally from the cuisine of the land. In addition, milk products are also popular, such as kaymak which is the whipped cream made of boiled milk. Kumys and shubat must also be given a try when in Kazakhstan.

Kazakhstan, just like its cuisine, offers a different shopping experience to the visitors.

The currency of the country is Tenge. In big cities you can use your credit and ATM cards easily.

If you are on your way to Astana or Almaty, you can shop in big malls just as the way you are doing in your hometown. However, even in the big cities’ small regions, it is possible to shop in a more authentic way while buying definitely authentic items such as handmade carpets for example. The milk products mentioned in the cuisine part are also common to be bought as souvenirs. Some also think that caviar is pretty cheap in Kazakhstan and makes perfect gifts. It is very common to come across some beautiful handmade items such as jewelry boxes, toys clothes, embroidered textile and more since Kazakh people are really talented craftsmen.

Kazakhstan is a country where a wide range of attractions are in reach of the visitors. The nature lovers will indulge themselves with picturesque looks of the land in that part of the world. History lovers will dig into the hundreds years old traces of the country, most of which have been very well preserved. In big cities, one can enjoy the regular city life with a touch of Kazakh way of living and for the ones that after excitement and adrenalin, a bunch of extreme sports centers can be found across the country.

Some of the most famous attractions in Kazakhstan include Medeo the skating ring that is located 15 km outside Almaty, Chimbulak skiing resort, Charyn Canyon, The Korgalzhin National Park, Bayterek Tower, Baikonur Cosmodrome, Ustiurt, Burabay (Borovoe) National Nature Park and Semipalatinsk.

Kazakhstan is one of the countries that has been gaining increasing attention both as a tourist and a business destination. The investments made in the recent years to the venues and hotels that can host large scale international events have a huge impact on that increasing attention. Every year, especially in Astana and Almaty, a large number of conferences, congresses, symposiums, fairs and trade shows are being held.