Start your trip to New York by reading the most recent information about the Big Apple, its attractions, places of interest and best spots to dine & shop. 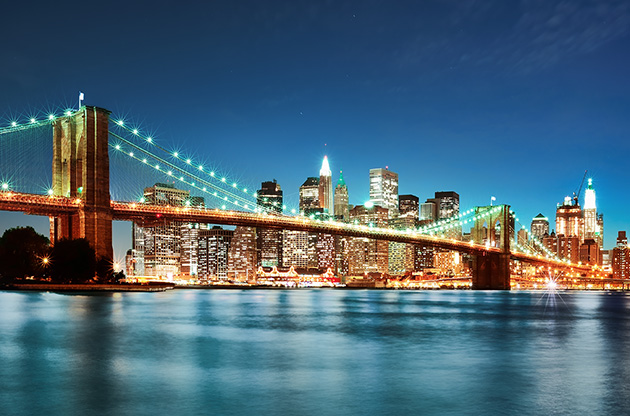 First time visitors to New York City marvel at the assault of the five senses they experience almost immediately after stepping off the plane. The sights, sounds, smells, textures and flavors of the city resonate with tourists long after their return trip home.

A walk down the street will reveal the sounds of honking cabs providing background accompaniment for the sweet music of street performers, the delicate aromas of street vendors selling their epicurean delights on every corner, the sight of the throngs of humanity hurrying to the next business meeting amidst the skyscrapers soaring high into the air, the feeling of the concrete jungle beneath your feet and the taste of some of the finest cuisine the world over.

This city that never sleeps is the home of over eight million people and is comprised of five boroughs: Manhattan, Brooklyn, the Bronx, Queens and Staten Island. Each location is known for its diverse culture and the wealth of things to do, see and experience.

Thousands of business people come here each year as New York City is the center of some of the most powerful industries in the world: banking, trading, fashion, the arts and it is home to the United Nations, which brings people from all over the globe to the city every day.

But all work and no play makes Jack a dull boy, indeed. There are many ways to occupy your downtime in New York City, and once the conference is over and you have explored all five boroughs you will go back home having experienced some of the amazing amenities this popular tourist destination has to offer and will be aesthetically richer for the experience.

Yes, there is truly something for everyone in the Big Apple. A visit here is like taking one hundred vacations in one. This amazing city may be fast-paced and bustling, but slow down and drink in the culture, flavors and diversity New York City has to offer.

Where is New York City?

New York City is located in southeastern New York State. It borders the Hudson River and is across the water from the state of New Jersey.

How to get to New York City?

Most travelers coming to the city will fly into LaGuardia, JFK International or Newark International Airports. LaGuardia and JFK are located in Queens, with Newark across the river in New Jersey. Once on the ground, take a cab or shuttle to your hotel or use one of the city’s many private car services, where a car and driver will be waiting at the airport for you to drive you to your hotel in style!

When it comes to things to do in New York City, one could write a book about the topic and still never cover everything, but here are a few of the highlights the city has to offer.

Central Park is a favorite place for locals and visitors to the city. This romantic park sits in the middle of Manhattan and is a great place for a picnic, a walk or jog or to take a bike ride or boat ride. Visit the fairy castle or the zoo and you’ll feel like a kid again.

Standing on the ground at Ellis Island and looking up at Lady Liberty will leave you in awe and wonder. This monument to America’s freedom is one of the most popular attractions in the city. Take a ferry ride to the island, or take a harbor cruise around the island and enjoy the view from the boat. Either way, you will be enchanted by this marvelous tribute to America.

The Metropolitan Museum of Art is a feast for the eyes. Take in over two million pieces of the finest art the world has to offer. Sculpture, paintings and photographs will take your breath away as you drink in the works of some of the most brilliant artists of all time.

The American Museum of Natural History will make the natural world come alive! With animal exhibits and their famous dinosaurs, you will be enchanted with the beautiful displays featuring the exotic and the unusual – and sometimes the just plain bizarre!

Shoppers delight in coming to New York City because of the amazing variety of department stores, boutiques, galleries, antique shops and vintage emporiums that are located in every neighborhood in the city.

The first stop for young and old alike is FAO Schwartz Toy Store. From the opening strains of “Welcome to our World” playing at the front door to the sounds of happy children resonating from every corner, FAO Schwartz is the biggest and best toy store in the world. Come in to play with the toys or make some purchases and feel like a kid again.

Fashionistas will be in shopper’s heaven on Fifth Avenue. Home to the Saks flagship store is practically a requirement, and ogle the beautiful diamond jewelry in Tiffany’s. Men, prepare to upgrade your wardrobes with a visit to Barney’s New York for the finest in men’s fashions.

No visit to the city would be complete without visiting Carnegie Deli. This icon of New York is best known for its amazing corned beef sandwiches and Reuben sandwiches with pickles, as well as potato knishes. It has been featured in many films as well.

For beer wine and cupcake lovers, Sweet Revenge in Greenwich Village is the city’s penultimate place to brunch, lunch or dine. Featuring the city’s best cupcakes paired with wine or beer, the up and coming restaurant also has a full service menu and some of the friendliest staff in the Village.

And of course, sample some of the city’s diverse street fare. Everything from pretzels, hot dogs, falafels, burritos and tacos, Chinese food, Indian cuisine and more can be had on every corner.

Nightlife in New York City is a never-ending party. With bars, nightclubs, and of course, all the amazing productions on Broadway, there is something for every taste. Take in a comedy show at Gotham Comedy Club in Manhattan, or watch a great blues, jazz or rhythm and blues show at the Apollo in Harlem. Or just walk through the streets of Manhattan and marvel at this amazing city, which is truly the City that Never Sleeps.

If a tour is the thing, it doesn’t get better than a dinner cruise in Manhattan. These popular harbor cruises feature fine dining, dancing and some of the most spectacular skyline views the city has to offer.

For fans of television and film, one has to check out A Slice of Brooklyn Pizza and Movie tours. These tours take tourists to Grimaldi’s, home of New York Style pizza, for a slice of pie and then to the filming locations of such movies as Saturday Night Fever, Goodfellas, Annie Hall, Scent of a Woman and many more.

The quality of the hotels and the professionalism of the organizers in New York City is not an assumption but rather a fact, and this makes the larges scale congresses, conferences, symposiums, exhibitions, fairs and tradeshows that take place in the city a desired opportunity.