All of the needed information about accommodation, restaurants, shopping spots, things to do and attractions can be found on this page. 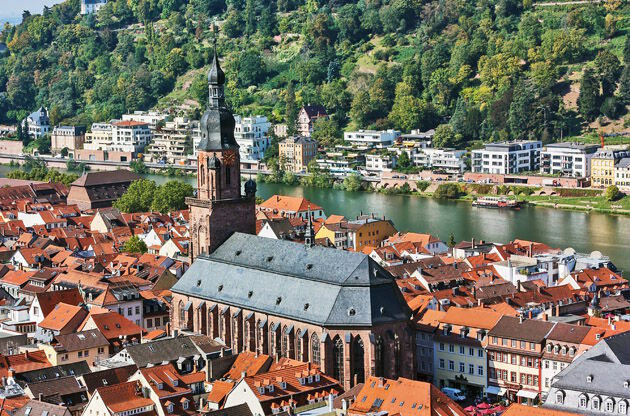 Heidelberg is not one of the cities in Germany that you hear about very often and yet it has much to offer travellers of all descriptions, from backpackers through to individuals travelling on business. Set within a deep valley in the state of Baden-Württemberg, Heidelberg is undoubtedly one of the most picturesque locations in all of Germany.

Heidelberg holds the oldest university in Germany and has a very strong student population. This does not mean that it is a crazy party town but a site for academic excellence that attracts many of Europe’s greatest thinkers. As well as having a reputation for academia, Heidelberg is also considered an artistic city, and many poets and painters have been attracted to the city throughout history. For example, the poet Goethe lived here and Mark Twain wrote extensively about Heidelberg in his travel memoir, “A Tramp Abroad”.

While much of Germany has a very contemporary feel because most of the country has been rebuilt since it was destroyed during the Second World War, this cannot be said of Heidelberg. The city was one of the few places that managed to avoid being bombed. General Patton liked the city so much that he opted to preserve it and create the headquarters for the US armed forces in Europe right in Heidelberg. Today, there is still a significant US population living in the city.

If you do choose to visit Heidelberg, you will be delighted by the mild climate, which provides sunny skies in the summer and mild winters that are far removed from the numbing winters of Berlin.

Heidelberg is situated in the state of Baden-Württemberg, located in the west of the country, fairly close to the French border.

The closest international airport to the city is in Frankfurt, which is about an hour away if you are driving. To get from the airport to Heidelberg, you can also make use of the very efficient high speed train system, or you can alternatively use Lufthansa’s shuttle service.

If you are travelling from within Germany, you also have the option to arrive by train. The main station in Heidelberg connects stations such as Stuttgart, Mannheim, and Frankfurt. If you are choosing to travel from within Europe, the nearest train station that connects to destinations such as Paris or Amsterdam is Mannheim’s station.

The A5 motorway connects Frankfurt and Heidelberg should you wish to arrive by car.

Things to Do in Heidelberg

Heidelberg is a city that has a great history and there are ample attractions and museums to be explored for people who wish to get to know the local history and culture of this city. The most enduringly popular and impressive attraction in the city has to be Heidelberg Castle, which dates right back to the 13th century. This huge structure dominates the landscape of the downtown area, and a steep climb to the top of the castle will offer the very best views of the surrounding city.

Heidelberg is a must visit destination in Germany for fans of museums as it offers some of the best sites of learning in the country. For those interested in science, the Deutches Apotheken Museum housed within the castle provides a comprehensive insight into ancient and contemporary medicines and medical practices, and in the Museum of the Palatine you will find an assortment of paintings, porcelains, and textiles related to the history of Germany.

There is no better way to spend a relaxed day in Heidelberg than to amble along the quaint streets of the old quarter while popping into the many independent shops that sell everything from local crafts to local food produce.

If you are looking for something particularly special to remind you of your time in Heidelberg, make sure that you head to Antikem on Heiliggeiststrasse, an incredible antiques shop with a hand selected collection of special items. And to treat yourself to something really indulgent, Chocolaterie St Anna No.1 needs to be at the very top of your shopping agenda. You will be awarded no prizes for guessing what is sold in this treasure of Heidelberg: chocolate, chocolate, and more chocolate.

Dining and Nightlife in Heidelberg

No matter what your culinary tastes might be, you will be able to find some delicious food that pleases your palette in Heidelberg. For a city that is so proud of its history, it should come as no surprise that you can find lots of traditional German fare here. But it is also possible to find many international dishes from all over the world.

For traditional food, make sure that you reserve a table at the renowned Wirsthaus Zum Nepomuk where you should save room for dessert because their strudel is talked about all over the city. For something a little more exotic, head to Restaurant Serai, a popular Malaysian restaurant in the centre of town that serves up Malay staples such as satay chicken and laksa. Of course, you will also be able to find German bakeries over the city if you are in the mood for a small afternoon bite of a pretzel or a pastry.

Because Heidelberg is a university city, there is no shortage of night time (or daytime for that matter) drinking options. If you head to Hauptstrasse, you will be able to find bar after bar serving up local beers and ales.

Excursions and Tours in Heidelberg

One way to get a true insider’s peek into life in Heidelberg is to book an excursion or a tour of the city that will enable you to be guided by a local expert. The city Segway tour is known for having the best guides in the city, who can explain the history and culture of Heidelberg in either German or English.

Heidelberg is a city that offers a great deal for the business traveller. As well as having a great range of business accommodation options that have meeting and conference rooms, the city hosts a number of professional trade shows, fairs, exhibitions, congresses, conferences and symposiums throughout the year. Trade shows include an environmental protection fair, and a wedding exhibition. The US army and the university also attract foreign visitors who are travelling to Heidelberg on business.