About Venice, Italy, find the wise recommendations about the dining alternatives, attractions, accommodation options and activities in the city. 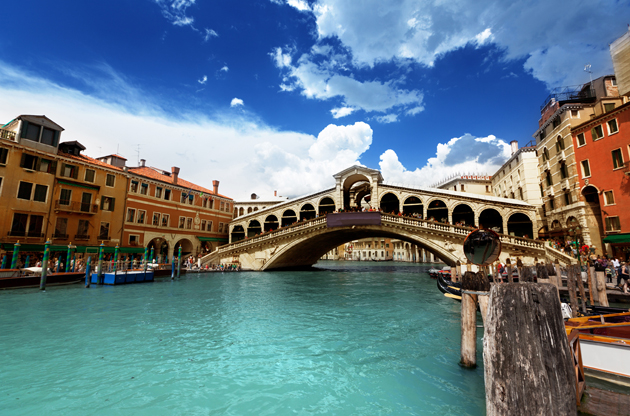 Born from the sea foam like Venus, goddess of love and beauty, Venice is one of the most exceptional and romantic places in the world. A city so unique to seem surreal, magically frozen in time and immersed in an atmosphere of romance, mystery and festivity.

A source of inspiration for many great artists, from Shakespeare to Fellini, Vivaldi and Goldoni, Venice can be mistaken for the set of a great theatrical opera, where each corner is the perfect spot to take a picture. It does not come as a surprise that this is one of the most desirable destination for tourists, that most of the year the centre is crowded.

Balanced above the water over a centuries-old forest of poles, even its architecture is enchanted. Venice is, in fact, a cluster of 118 different islands, divided by over 200 canals and linked by 400 bridges that form a labyrinth of over 3000 alleys (called Calli) and water. Viewed from above it has a fish-like shape, gashed by the huge Canal Grande, its main water-traffic corridor. The city is divided into six districts (the “Sestieri”): Cannaregio, Castello, Dorsoduro, San Marco, San Polo and Santa Croce.

The lagoon is not only a location for Venice, but the destiny the city has always been bounded to, for better or for worse. Often brutalized (even today) by the so called Acqua Alta (disastrous inundations), Venice founded its richness on the sea, becoming one of the greatest maritime powers ever known in the European history, with names like Marco Polo, the first occidental merchant to get to China.

Venice is a city destined to get under your skin: a place capable of meeting any imaginary and make it become reality. Don’t be afraid of getting lost in this UNESCO Human Heritage site, because anywhere you end up is going to be beautiful. More than the famous highlights, it’s the small and hidden alleys, dead-ends, courtyards and squares where you can take some time off the tumult that makes Venice.

Venice is the main city of north-eastern Italy, a very rich and thriving area. Its district counts 300.000 residents and it’s the capital of the Veneto region. The city is located in the gulf of the Venetian Lagoon, overlooking the Adriatic Sea.

The numerous canals work as streets for transportation, as you can get to Venice via water. The railway connects Venice to the rest of Italy, but there is also a bus and car terminal near the Ponte della Libertà (bridge of Freedom). The closest international airport is Marco Polo, from which you can reach the city by bus, taxi or even steamboat.

Things to Do in Venice

Start your tour from the train station and cross the Canal Grande choosing between the Ponte degli Scalzi Bridge or the more modern Ponte della Costituzione, made of iron, glass and stone. Passing by the Calle della Lacca and the S. Evangelist School, head to Campo dei Frari. Once here, continue walking keeping your left to come across Campo San Paolo, Campo Sant’Aponal and Campo San Silvestro.

Following the canal you will get to the notorious Rialto Bridge. Take some time to admire this fascinating structure and then go across it to get to San Marco square. This incredible location is probably the most popular stop in the city. Here you can visit the Basilica, climb up the Bell Tower to admire a breathtaking view of the lagoon and visit Palazzo Ducale.

From San Marco head to the Ponte di Paglia and cross this bridge to spot the famous Ponte dei Sospiri (Bridge of Sighs), distinguished by the emblem of doge Marino Grimani, connecting the Palazzo Ducale to the New Prisons.

As an alternative, you can also decide to take the Vaporetto, a steamboat that will allow you to get around the city. If you are in romantic company, you might want to jump on a gondola, an iconic symbol of Venice and a relaxing way to see the beautiful buildings that face the canal.

The spirit of Venice does not end with its architecture. If you want to experience in first person one of the most important tradition of the city, make sure to visit it during the famous Venetian Carnival, in which time the streets flows with masked people wearing traditional, grotesque and luxurious costumes.

As most of the Italian cities, Venice is full of gorgeous boutiques and antique shops. However, to get the most significant souvenir you need to take a boat and go to the near island of Murano: it’s here that the world-famous glass of the same name is produced. It does not come cheap and it’s not the handiest item to pack in your suitcase, but you can find affordable versions.

Dining and Nightlife in Venice

Venice offers a multitude of restaurants of variable quality and price: you have to know how to choose and avoid to end up in some tourist-trap. It wouldn’t be Venice without multiple romantic small places where you can have a candlelight dinner. The venues diversify themselves either as Osterie (taverns that once served as wine tasting places, but now are legit restaurants) or Trattorie (traditional restaurants).

Feeling like having some fun? At night, the most animated areas are Campo Santa Margherita in Dorsoduro and along the Fondamenta degli Ormesini and Fondamenta della Misericordia in Cannaregio. Venice also has a very popular Hard-Rock Cafè.

Excursions and Tours in Venice

The surroundings of Venice deserves your attention as much as the city itself. Take a boat and start a tour of the near islands: Murano, Burano, Torcello, Lido, Giudecca, Saint George Island, and Mestre are only some examples of the many beautiful excursion available around the city.

Being an iconic, romantic city in the world, Venice is an attraction center drawing international attention in any time of the year. Numerous world class events like conferences, congresses, trade shows, fairs, exhibitions and symposium take place in this alluring city and the attendees from all around the world have a matchless experience during their visit in Venice.