A beneficial guide for Torino travelers. Read the local advices and tips for the best restaurants, shopping sport, things to do and accommodation options. 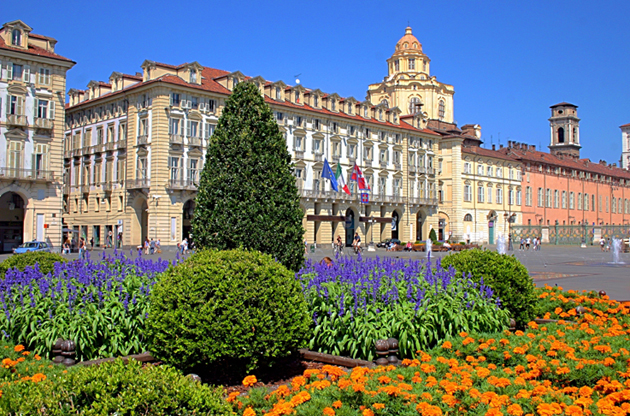 When you think about Italy, Turin is not the first city that pops in your mind: there are far more popular destinations that meet travelers’ imaginary of the interesting Italian heritage. However deep-rooted this dogma, by taking the time to get to know Turin you will soon realize that is far from the truth. Turin is a black pearl, a place touristic-wise as underrated as it is, in reality, special.

The forth most populated city in Italy (900.000 citizens), as well as an economic force, Turin plays today a fundamental role in the country’s balance. It is also a very lively and active city that represents on the major cultural and scientific Italian centers, with a surprisingly high concentration of colleges and universities.

The reason for its shy personality is simple: during the Renaissance, the cities that most counted in Italy were Naples, Florence, Milan and Venice, while Turin was no more than a small village on the borders that worked as an outpost against invasions. Its blossoming happened only later than the industrial revolution, when the city finally developed in a modern sense.

Turin is also known as “the small Paris”, due to its characteristic streets, squares, iconic cafés and the many monuments. Right after sunset, the city is illuminated by the warm light of lampposts that creates a dreamy and romantic atmosphere similar to the one in the French capital. Former residence of the Savoia family, Turin preserves several marks of its royal past, alternating unforgettable monuments, works of great architects, to new exhibition spaces dedicated to contemporary artistic and cultural expressions.

You will feel privileged in getting to know a city that is more authentic than touristic, that is genuinely culturally avant-garde, and you will discover a city full of attractions, beauty, youth and life, with an exclusive historical heritage.

Turin is the capital of the Piemonte region and it’s located 239 meters above sea level, near the confluence of the Po and Doria Riparia Rivers.

If you are already visiting Italy, the easiest way to get to Turin is probably by train: since the introduction of the Frecce, Italian high speed trains, it only takes one hour to reach the city center of Turin from Milan, or four hours from Rome. If you come from abroad, the easiest route to Turin is by plane. Turin “Pertini” airport – located 16 km from the city in a town called Caselle – is well connected to the center: you can either reach downtown Turin by train, bus or taxi in roughly 30 minutes.

Things to Do in Turin

Visiting Turin, you might want to start from Piazza Castello, which is the closest spot from the various museums, monuments and other highlights like the Mole Antonelliana. In the middle of the square you can find the Madama Palace, a medieval building in Baroque style and venue of the Municipal Museum of Ancient Art.

Make your way beneath the porticos to encounter the Royal Theatre, that hosts the Opera season, and keep walking until you get to the Royal Library: in addition to a remarkable collection of manuscripts and ancient weapons, the building preserves the famous self portrait of Leonardo da Vinci.

Now it’s time to head to one of the most important buildings in Turin, the Royal Palace: the majestic official residence of the Savoia royal family for over two centuries. Right beside the palace is located the Duomo, the only example of architecture of the Renaissance. Walk another few minutes to get to the most ancient area of the city, where you can find the Roman Palatine Gate and the remains of the Roman Theatre. You can also visit Piazza della Repubblica, also known as Porta Palazzo, the biggest open-air market in Europe.

You might be tired of walking by now, or perhaps it’s started raining, so why not paying a visit to one of the incredible museums that Turin has to offer. You can choose, among the others, between the Egyptian Museum, the Sabauda Gallery and the Museum of Antiques, or you can decide for a more specific and original option, like the Museum of Cars, the National Museum of Cinema, the Gallery of Modern and Contemporary Art, or even the Medieval Fortress, a reconstruction of the life in Turin during the Medieval ages.

Turin has a dual personality: a traditional one and an underground, innovative side. Even in the choice of shops that the city offers, classic and contemporary coexist and mix. Luxury Department Stores and high fashion boutiques alternate to ateliers, concept stores and avant-garde shops that sell unique and innovative products.

Dining and Nightlife in Turin

Piemonte has one of the richest and most delightful Italian regional cuisines. Eating out in Turin is like participating to a tasty treasure hunt, in that there is an extremely wide choice of restaurants, meals and wines. To cite just the most famous meals, Turin is famous for its wide selection of traditional cheeses (e.g. Castelmagno), its “Agnolotti” (the local version of “tortellini”), its fine meats (either served raw or boiled), its plates based on truffle or hazelnut. Not to mention its red wines: Dolcetto, Nebbiolo, Barbera and Barolo are among Italian best wines.

When it comes to nightlife, you can either enjoy the fascination of Turin’s many floodlit squares, or take a walk alongside the Po river where the majority of pubs and clubs are located.

Excursions and Tours in Turin

Turin’s territory surprises with a huge quantity of perfect scenarios: from the Pellice Valley to the Chiusella. There are many option for those who love to hike or mount on a mountain bike and enjoy some time off the traffic. Another interesting idea for a tour is visiting the Valentino Park, an iconic green space in the city that offers the possibility of visiting a beautiful castle.

Being rich in history, cuisine and cultural activities, Turin has always been charming as a host city for international gatherings like conferences, congresses, fairs, exhibitions, trade shows and symposiums. The attendees coming to Turin for these events can have a great time out of the events and may have an unforgettable experience.