All you need to know about Amsterdam for a good trip and recommendations on the city's sightseeings, excursions, events and hotels. 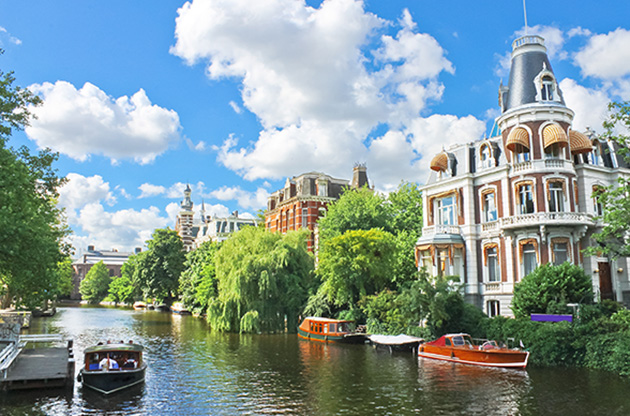 ‘This city is a book, even for the ones who don’t want to read’ wrote once poet Adrienne Slomp about Amsterdam. Such a stanza could have been written for almost any city. However it wouldn’t be as accurate as it is for the beautiful Amsterdam.

With a population of 800.000 in 9 different regions, this miraculous city hosts more than 3.5 million visitors each year. It is the largest city in Holland and the center of culture and arts but not the seat of the government; it is The Hague.

Amsterdam is also regarded as the capital of the freedom in Europe. In addition to the liberal point of view that leads the city, the perspective of the locals also contribute to this perception.

There is another reason why the city has gained more importance and fame throughout the world. Yes, it has always been really popular not only because of the artistic heritage it has but also for the tolerance of the authorities towards prostitution, drug usage and same sex marriage. According to the statistics in 2011, the city is now the one with the most different nationalities. In Amsterdam, people from 178 different nations live all together in peace.

Amsterdam is on the west of Holland, in the province of North Holland.

Schiphol Airport, which is 15 km south west of Amsterdam, is one of the busiest airports in whole world. There are many flight companies offering direct flights to the city. There are many options to get to the center from Schiphol.

Getting Around in Amsterdam

Amsterdam has got one of the most convenient local transportation system. The train, tram, metro and bus is easy to use and only requires to buy an OV-chipkaart prior to boarding. A route planner is given on 9292 and you can find detailed information about public transportation tickets and timetables on GVB.

Don’t forget that you are in one of the most bicycle friendly city! Renting a bike is always a better idea than any other form of transport in the city.

Amsterdam, where everyone can find something they’d like to see or try, offer lots of things to do or experience.

When you are in Amsterdam, make sure to spend a couple of hours in Dam Square. As well as its historical importance, the square is now a meeting place for the locals and hosts all sort of events. Although remembering the Holocaust may not be a good idea during your trip, Anne Frank’s House is a museum that tells a lot about the event. Rijksmuseum and Van Gogh Museum are the other two that shouldn’t be missed out.

Amsterdam, in addition to the ones that serve Dutch cuisine, has got a lot of restaurants that offer world cuisine. Nieuwezijds kolkc is the place to go try out some dishes that are originally Dutch. Especially Moeders, Haesje Claes and t Zwaantje are 3 of the best restaurants serving typical Dutch food.

The famous Red Light District in the city is one of the most famous places in the whole city. Sex business oriented street attracts thousands of tourists every year.

Amsterdam is widely known for coffeeshops that sell cannabis legally. The city has got a live night life scene and pubs that would suit all types of interest.

You can shop almost anything you like in Amsterdam. All you need to know is where to get them.

Waterlooplein Flea Market and Albert Cuypmark are the place for vintage lovers. The market is usually crowded but the time spent there is never in vain, something you’ll love will come across.

De Negen Straatjes is the most central street by the canals. Boutiques that sell custom made items, stylish bookstores and bohemian cafes are located side by side.

The Haarlemmerdijk, Kalverstraat and and Leidsestraat are the other main districts and streets to do shopping. It is possible to find world famous brands but local shops offer more interesting items for usually a better price.

If you are done with seeing the places and buying the things on your list, then now is the time to spend some time in Amsterdam to inhale the unique atmosphere of the city even more.

Vondelpark is a great green spot to enjoy the relaxed mood of the city. Prinsengracht is the place to see the most amazing view of the canals that multi cross Amsterdam. Cruises in canals are highly available, you’ll come across many different companies around.

Holland as a country is one of the greatest spots to play golf. In Amsterdam there are many places to stretch your arms and enjoy the sport in a different shade of green.

Amsterdam may be one of the most relaxed and free cities in the world. However, there are still some points that’d be wise to keep in mind.

Amsterdam, the freedom capital of Europe, is one of the cities that hosts many international symposiums, congresses, tradeshows, fairs and exhibitions every year. The city is a great destination to go as an event tourist as it offers the expertise needed for these large scale events and a lot to discover, find about and admire in the free times.

What to do in Amsterdam