Read on to find about the beautiful city the Hague's attractions, major sights to see, dining & shopping areas and excursions as well with travel tips. 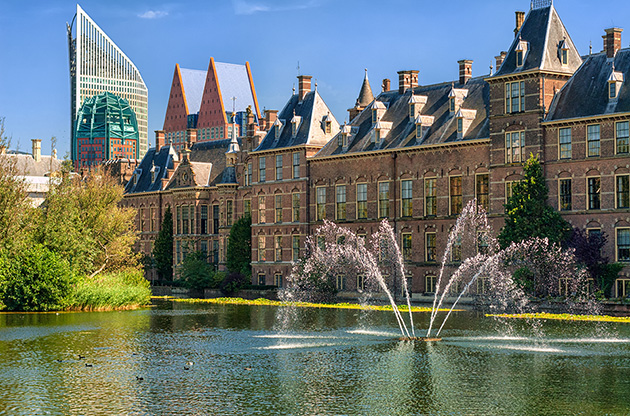 The Hague is a city buzzing with the electricity of fascinating people and ideas. You can't expect anything less from the International City of Peace and Justice, which is home to more than 150 international organizations, thousands of foreign nationals and the country’s royal family.

Located in the Netherlands on the North Sea coast, The Hague is beautiful and aristocratic but has gained a youthful quality with age. It’s the seat of government and the capital of the province of South Holland.

The city itself is home to numerous historic buildings that have been impeccably preserved. The arts and culture scene is vibrant and the city has some of the best art and museum collections in the world.

The Royal Picture Gallery Mauritshuis is home to the famed "Girl with the Pearl Earring" by Johannes Vermeer and for some that might be enough of a reason to visit other pieces in the museum's collection, including a self-portrait by Rembrandt and "The Bull," by Paulus Potter.

Many members of the Dutch royal family have chosen The Hague as their place residence if that says anything about the city. Their homes are dotted throughout some of the high-end neighborhoods, while the king and queen live in Villa Eikenhorst in Wassenaar.

When you think of The Hague, beaches don’t really pop to mind but Scheveningen beach is really a great mini escape from the metropolitan city. The Scheveningen Resort provides an array of watersports and surfing classes as well as restaurants, lounges and clubs.

Temperatures in the city are usually quite comfortable with low 20s in the summer months. Winter is chilly but the city on average does not drop below 0 degrees.

Get ready for one of the most exciting and soul awakening trips of your life. No matter why you are visiting the city, The Hague makes sure you have the time of your life that will be remembered with longing even long after your journey.

Where is The Hague?

The Hague is located in the Netherlands in the province of South Holland.

Getting to The Hague

The Hague is close to two major airports.

Most international visitors fly into Amsterdam Schiphol Airport which is connected to The Hague via two direct trains provided by Hollands Spoor and Centraal. Taxi service is also available.

The second option is the Rotterdam The Hague Airport which provides shuttle service to the RandRail station that will then get you into the city. Taxi service is available.

Getting Around in The Hague

Public transportation includes good bus service as well as a tramway network. RandstadRail service is used to get to other cities in the region. The Hague is also very pedestrian and bike friendly.

Attractions in The Hague

Sightseeing & Museums in The Hague

For a truly inspirational tour visit the Peace Palace, the child an international sentiment for world peace that emerged in the beginning of the twentieth century. The palace was built in 1913 through contributions made by countries that believed in the message of peace. Today the palace is home to the International Court of Justice, the Permanent Court of Arbitration as well as The Hague Academy of International Law.

The Hague Tower - for a gorgeous panoramic view of the city while you sip on a cafe or sit down for a full-course dinner, the Hague Tower is the perfect spot to get an eagle's eye view of this beautifully-laid out city.

The Madurodam is truly a whimsical and fascinating piece of work. An imaginary Dutch city is brought to life on a 1/25 scale, which is large enough to see the details in the buildings but small enough to feel as though you are a giant wandering through a fairy city.

Museum de Gevangenpoort (The Prison Gate) has many stories to tell with a host of famous prisoners having spent time in the old brick cells in the 15th and 16th centuries. Guided tours are the best way to see the museum and learn about the history of criminal justice in The Netherlands. English tours are only available on Sundays.

Shopping in The Hague

The Hague Market is a must visit location if not simply to wander through the 500 stalls and marvel at the sheer size. You can find just about anything you can think of at the market from exotic fruits to computer products and from fish to shoes. A visit to the market will give you a chance to see the playful side of The Hague and also grab some unpretentious and flavorful food.

Head to the Grote Marktstraat to shop where the locals do. The De Bijenkorf department store is a favorite and stocks items like perfume, books and home accessories.

A visit to the old Haagsche Passage is a great way to combine shopping and history. The old architecture is the perfect backdrop to bookstores and jewelry shops and is a bit of a stroll through history but with a modern touch.

The Hague is home to world class brands but for a tourist keepsake there is the kitschy Dutch clogs, which you likely will never wear but maybe can display somewhere in your home (or closet). Two of the most purchased items that will actually come in use are Dutch cheese and sweet little waffles called Stroopwafels.

Dining and Nightlife in The Hague

The Hague is home to some of the finest dining in the world with an almost ridiculously unfair amount of Michelin-starred restaurants offering tantalizing cuisine to discerning foodies.

The Dutch East Indies connection in the city has a strong hold and because of that you can find some of the best Indonesian fare outside of Indonesia in The Hague. The Hague also has its very own little little Chinatown where authentic steaming dishes are welcomed by the international crowds. The restaurants get fairly busy weeknights so it is best to go a little early to snag a table.

The Hague has a great pub scene and as it should with all of the politics and planning that happen in the city. A great place to head to is Plein Square where politicians meet for a pint in places like Plein 19 and Berger.

Excursions in The Hague

The Hague is the ideal place for bike tours. After breakfast, grab a bike and take the half hour ride out to Katwijk which will have you riding through the Meijendel nature reserve. On your way you will enjoy the lovely beauty of the dunes, but it might be hard to keep your eyes on the bike paths since the nature reserve is home to one of the largest number of bird species in the province.

Rotterdam is just a short drive away and definitely worth a full day trip if not more. The port city has that unique vibe a sort of rugged sailor freshness meets modern city and architecture.

Event Tourism in The Hague

The city hosts hundreds of conferences, congresses, symposiums, seminars, fairs and trade shows annually and with that has numerous facilities to accommodate small and large groups. Numerous international organizations are based in the city which means event organizers are fully experienced in dealing with international clients and their unique requests. An event in The Hague is really an event of gold standard.