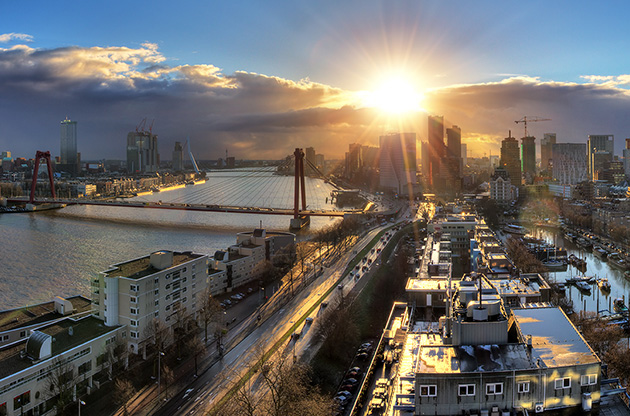 Port cities dance to their own tune and Rotterdam has definitely got a jig that is worth talking about. The city is home to one of the busiest ports in the world and is also a major transit point from which goods are transferred all over Europe.

Rotterdam is not pretty, it's futuristic and architecturally innovative. The city skyline requires numerous clicks of the camera with the Erasmus Bridge of swan-shaped proportions leaping across the river Mass and the New Luxor skyscrapers that seem too perfect to be real.

And even more interesting is that some of these futurist designs were built several decades ago like the out-of-this-world cube houses designed by architect Piet Blom. Other great buildings include the Euromast, the tallest look-out tower in the country, and the Millenium Tower which reminisces of New York's Empire State building.

The city is alive all the time with ships sailing in and out, new people coming in and out and this also means a lively nightlife and Rotterdam aims to please the millions of visitors that pour into the city through the year. Football is big in the city and the fans boisterous, take in a game at the Stadion Feyenoord for a true becoming-a-local experience.

Rotterdam weather is oceanic and fairly mild. The summers are warm but temperatures usually stay in the low 20s. In the winter the numbers dip and fall below zero with January and February being the coldest months.

Rotterdam is located in the province of South Holland in The Netherlands.

Rotterdam The Hague Airport is located in the city, providing international and domestic flights. From the airport grab a shuttle, there are two, one will get you to the RandstadRail station and the second straight to Rotterdam Central Station. Taxi service is also available. If travelling from England you can take a boat into Rotterdam and high-speed train is an option from France and Belgium.

Getting around the City

Travelling within the city is supremely easy with an extensive public transport network on land and water that includes bus, tram, train, water bus, water taxi and ferry. The Aqualiner is a quick ferry that can get you to various stops around the city like Erasmus University while the water bus is great for a quick tour of the city by water.

Things to Do in Rotterdam

The small city has oodles of things to do. There are numerous museums including the Boijmans van Beuningen, Netherlands-Architecture Institute, Kunsthal and the Maritime Museum. The city is also home to the Diergaarde Blijdorp Zoo, which hosts the walk-through Oceanarium aquarium that provides a strangely surreal experience.

If you love the architecture you see in the city head to the Netherlands Architecture Institute to learn a whole more about what goes on behind the scenes from design to town planning. Arch Guides also provides architectural tours through the city.

For a little class and music for your trip take some time to attend the dazzling performance of the Rotterdam Philharmonic.

Trendy shopping is abound in Rotterdam with the city centre. Lijnbaan, Koopgoot and Meent are just a few of the well-known shopping streets located in downtown and shops on the streets are open seven days a week. Department stores also have storefronts in downtown including Vroom & Dreesmann.

Of course, a visit to any city in the world isn't complete unless you go to the local market. That's where you get to see what people actually cook with and eat, how informal business works and also maybe just a little bit of local gossip.

This city also has several large shopping malls with the Alexandrium and Zuidplein Mall being two of the largest and located just outside the city center.

Dining and Nightlife in Rotterdam

Rotterdam's port city status also makes for an eclectic restaurant scene that caters to all sorts of tastes from Chinese to Italian to French and local Dutch.

Meent Street is a popular for exclusive clubs and bars while the the harbour is a great place to head for a nice dinner near the water. It is particularly popular with students.

There is a huge house and dance music scene in Rotterdam which makes for a lively nightlife. Stadhuisplein is a very popular area for big parties during holidays and is packed with clubs and bars for a visit any night of the week.

Excursions and Tours in Rotterdam

For a truly Dutch experience head to the windmills of Kinderdijk, which are just 15 miles east of Rotterdam. These beautiful structures date back to the late 1700s and the area has been declared a UNESCO site.

A trip an hour outside of Rotterdam will lead you to the Delta Works, and they are really a modern day marvel of engineering. The Delta Works protect the Netherlands from flooding and just really have to be seen to understand the magnitude of the work.

Day Trip to The Hague

If you are in this city you must go to The Hague, it is a 15 minute drive from Rotterdam and will take you to the seat of Parliament and home of the royal family. Stately old buildings and the numerous museums and art galleries will keep you busy all day and in addition, the sheer number of Michelin-starred restaurants require at least a lunch if you don't have time for dinner.

The amazing venues in this city really make it a wonderful place to host meetings and events. Attendees will be blown away by the amazing design and architecture of this city. Rotterdam hosts numerous international events like conferences, congresses, symposiums, trade shows, fairs and exhibitions yearly and has gained a reputation for efficiency and delivery in true perfect Dutch style.