Indulge yourself with the delicious Belgian bites when you are there. Here are the top 3 mouthwatering suggestions to try when in Brussels. 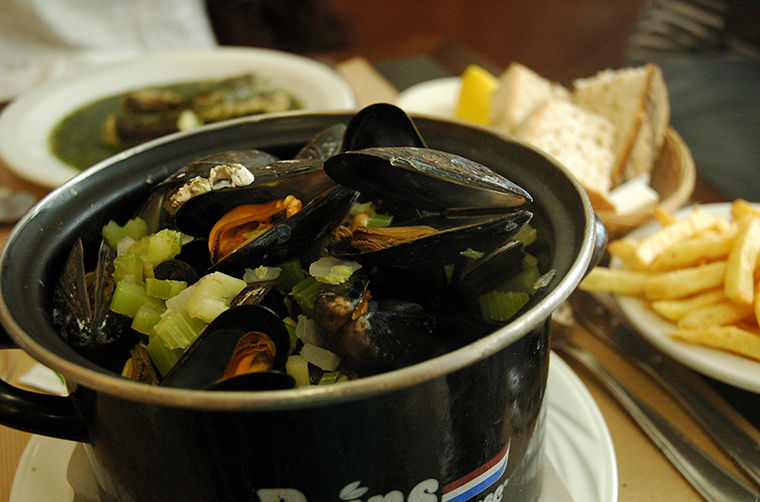 Mussels and Fries, or Moules-Frites as it is called in Belgium, is one of the most popular dishes that shape the Belgian cuisine. There are rumors about its origin; some say the dish was originated in France (this is also the reason why it is also very popular there) however Belgium proudly presents it as the national dish and it is very likely that you are going to be showered with restaurants that serve some of the most delicious types of the food.

Mussels may vary in the way they are prepared; they can be whether steamed or cooked. However the ingredients and sauces used distinct the varieties of the dish from one another. For example, Moules marinières, the most common type of mussels that can be found almost every part of the country is prepared with white wine and parsley. Mussels prepared steamed with celeries and butter is called the Moules natures, whereas Moules à la crème, which is also a common version is cooked with white wine’s thickened with flour and cream. In addition, Moules parquées, raw mussels served with lemon mustard sauce, Moules à la bier, the dish prepared with beer and Moules à l'ail which is cooked with garlic are among the popular types of the mussels in Brussels.

Mussels are almost always served with French fries in Belgium. If you go to a restaurant and order mussels, they will probably come in 1.5 kg per person which is usually okay for a person to eat. However, if you don’t feel like eating a whole bucket but rather see what it tastes like, sharing one with someone may be a good idea.

You already know the fame of the Belgian chocolate. The good news is you don’t have to pay loads of money for a small bar just the way you do back home, when you are in Brussels. You have the chance different sorts and most probably they’ll be the freshest they can get, so indulging yourself with the sweetest shade of browns is a great idea when you are in Brussels.

The history of chocolate dates back to the 17th century in Belgium. That is one of the reasons why chocolate is actually a part of the economy in country, as well as standing as an icon to represent the Belgian culture.

Neuhaus and Guylian are the two most popular chocolate producers in the country and in Brussels, you will see their stores, usually under the attack of foreign visitors. Keep in mind, most of the chocolate produced is hand labored, which makes it even more exquisite when compared to the mass produced ones that can be found just anywhere.

Some people say you can just forget about the mussels and even the chocolate because Belgium is the beer heaven of the planet earth and you shouldn’t spend time on filling your stomach with anything but beer when you are visiting the country, especially the capital Brussels.

In addition to the number of the types of beers in Belgium, the glassware used in the sector is big, just as expected. The beers usually are served in bottles, instead of cans and usually all of them have got a special glass which maximizes the taste of the beer.

There are a large number of beer bars in Brussels, you can try a wide variety of them in these bars. The staff of the bars usually gives detailed information about the type of beers and breweries, however if you want your trip to Belgium to give you the most on the beers, you might as well make a little research about the specific ones in advance to your trip.