Smart advices and tips for the dining options, shopping, cuisine, attractions and the accommodation options in Fukuoka, the city of Japan. 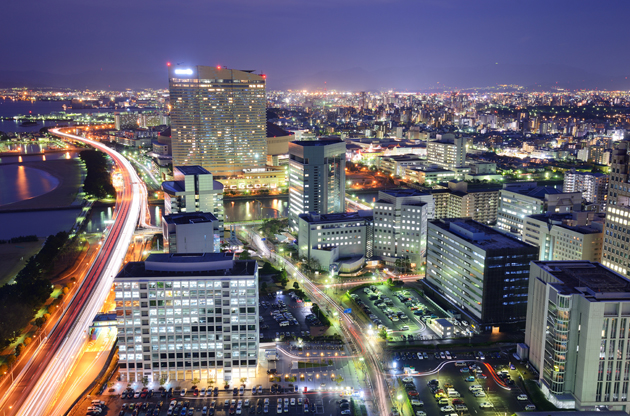 Fukuoka is one of Japan’s fastest growing cities, and now ranks number 6 in the country. It also has one of the most diverse cultures because of its proximity to the Asian mainland. It is considered one of the most livable cities in the world, and has extensive green spaces that add to the city’s beauty. Historically its harbor has been a key point for trade with other countries, and the reflection in the food and culture can easily be noticed.

The city was established in 1889 with the merger of the castle town of Fukuoka and the port and merchant town of Hakata. Though the name Fukuoka was chosen, the word “Hakata” is used frequently throughout the region, including for the name of the train station. The local dialect is referred to as “Hakata-ben.”

The city is centered around the ruins of Fukuoka Castle on the top of a hill which is now a large public park with gardens, museums and sports facilities. Hakata is to the east across Naka River, which acted as part of the moat. The main part of the town was to the north facing the sea.

The climate is subtropical, so winters are mild and summers are hot and humid. From June to September the weather can be rainy. No matter when you visit, Fukuoka is a diverse city with much to offer.

Fukuoka is the largest city on Kyushu, which is the southernmost of Japan’s four main islands. It is on the northern edge of the island and is known for its thriving harbor and trade. It is actually closer to Korea than Tokyo, so makes a convenient gateway for international travel.

Getting to and around Fukuoka

Fukuoka Airport is one of the largest prefectural airports in Japan, serving both domestic and international carriers. It is only 5 minutes by train to Hakata Station, the main transportation hub. Hakata Station serves shinkansen bullet trains as well as local lines. The Nozomi Super-Express takes about 5 hours from Tokyo on the Tokkaido/Sanyo line. Alternatively, there are bus and ferry lines which connect Fukuoka to other cities throughout Japan.

Most of the major destinations within the city are on one of the train, bus, or subway lines. Pick up a 1-day subway pass, or look for the Fukuoka Tourist City Pass. The latter is more expensive, but is good for travel in one day on all the public transportation and also includes reduced admission to many popular tourist sites.

Things to Do in Fukuoka

The central area of Fukuoka that holds the remains of Fukuoka Castle, contains much to entertain visitors. Relax in the open green spaces around Ohori Park Pond, which was once part of the moat. There is a traditional Japanese garden with a separate admission which is a beautiful retreat.

It has a wide range of permanent exhibits, from old Buddhist statues to Miro and Dali paintings; it also has rotating exhibits of international quality.

Gohoku Shrine is an interesting Shinto shrine in the park grounds.

Shofuku-ji holds the distinction of being the first Zen Buddhist temple built in Japan.

For more modern interests, visit the Fukuoka Tower’s observation deck in Momochi Seaside Park. The area around the tower boasts a lot of stylish and new architecture.

There is no lack of shopping opportunities in Fukuoka. From traditional Japanese handcrafts to international name-brand stores, a visitor can find almost everything in one of Canal City’s 250 shops and cafes.

The building is composed of interesting shapes and color combinations with a canal running through the middle that has regular water fountain shows, making it an interesting place to visit even without the intent to shop. Hawks Town, the professional baseball stadium complex, holds yet more stores, as does the modern Momochi Seaside Park.

Dining and Nightlife in Fukuoka

One of the most famous symbols of Fukuoka is the yatai, or outdoor food stalls. They are scattered around town, but consider a visit to the southern end of Nakasu Island and enjoy strolling the area and eating food while overlooking the water.

Yatai are small booths that seat about 8 people. Each has its own specialty dishes, from skewers of chicken called yakitori to oden, where patrons select the items they want from a large vat of simmering soup. Alcohol is also readily available, and the yatai can be very lively well into the night. Most are open from 6 pm to 2 am, though most are closed one day a week.

Be sure to try Hakata ramen, the regional food specialty. It is a savory dish offered throughout the city. For a fun taste experience, try Ramen Stadium on the fifth floor of Canal City. The multiple restaurants offer a range of ramen from different parts of the country.

Another good food choice is Hawks Town. Even those not interested in the professional baseball team, the Daiei Hawks, can enjoy the variety of restaurants, shops, cafes, movie theaters or hotels located within the stadium complex.

Excursions and Tours in Fukuoka

In the past, the administrative center of Kyushu was a town called Dazaifu, not far from Kyushu. A visit there will be an interesting look into the past, and it does not take long to reach via the Nishitetsu Railway. Dazaifu was established in the 7th century and retained power for about 500 years. Today there are a variety of temples and shrines to visit, as well as the ruins of the government buildings.

Another big draw of the city is the new Kyushu National Museum. For those preferring some time to rest and relax, head 40 minutes west of Fukuoka to Itoshima for a beach experience, including surfing.

Boasting being the seaport and railway hub of Japan, Fukuoka is also an easily accessible city. Therefore, many international events like congresses, conferences, fairs, exhibitions and tradeshows are held in this city each year.

Its rich culture, cuisine and tradition makes Fukuoka a perfect and inspiring place for the delegates and the world class hotels, venues equipped with the latest technologies create a favorable environment for the leading international events.