Read on to find about the most up to date travel tips and advice on Perth's sightseeing, shopping and major points of interest for a great time in the city! 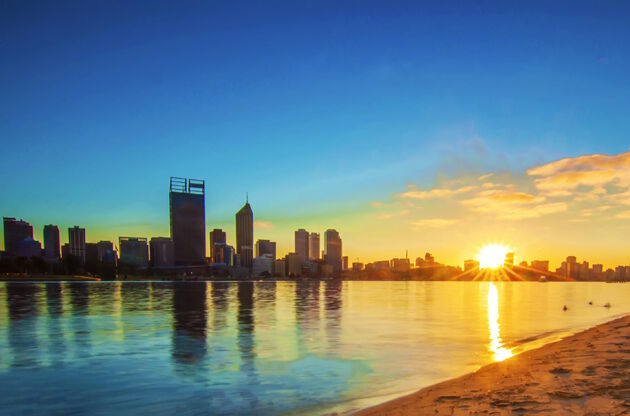 Perth is the fourth largest city in Australia and the capital of Western Australia. Europeans first established themselves there in 1829 and in 1856 the major settlement was named after the city of Perth in Scotland, the birthplace of one of its founders. It soon grew from its beginnings as a British colonial outpost and a convict colony to a busy city, largely because of the influx of settlers who arrived after the gold discoveries in the late nineteenth century and the businesses that were established to supply the prospectors’ needs.

Mineral exploration and the wealth that accompanies it have had significant influence in Perth; the city has a reputation for attracting entrepreneurs and high-flyers. There is a definite feeling of energy and self-sufficiency, possibly because, even by Australian standards, Perth is a long way from all of the other capital cities.

The river setting and the magnificent skyline create the impression of space and light all year round. The clean lines of Perth’s modern architecture add to the sense of freedom and vitality. Not surprising then, that Perth has a huge focus on outdoor activities and plenty of open spaces for leisure. The city has a high profile among sporting enthusiasts; Perth was the setting for the defence of the America’s Cup in the late 1980s and hosts regular international events in tennis, motor sports and horse-racing.

Perth’s is in the south west of Western Australia. Its stunning location on the Swan River and its proximity to the Indian Ocean coast means that water is never far away. The metropolitan area lies on both sides of the river, joined by a number of large bridges.

Perth’s international airport is approximately 12 kilometres from the city centre and easily accessed by taxi and by charter or public bus services.

Getting Around in Perth

Perth is a typically busy modern city but one that is easy to explore on foot. There is an efficient and relatively cheap transport system – using buses and trains - that operates within the city bounds and out to the suburbs and nearby attractions.

Sightseeing and Museums in Perth

If you are heading to Perth there are plenty of things to see and do. It offers plenty of cultural attractions - museums, galleries, performing arts spaces and sports venues.

Some of Perth’s major landmarks stand out as you approach the city by road. You will immediately notice the famous Carillon, containing the Swan Bells, on the shores of the Swan River. You can take in many of the major sights by walking the length of Riverside Drive, which follows the river through the centre of town.

Worth seeing are Government House, the Old Courthouse, and Barrack Square. You should make time to stroll in King’s Park, a vast area of botanical gardens, walking tracks, leisure areas with incredible views of the city.

There’s great shopping in the city centre, predominantly in the malls in Murray St and Hay St, in Carillon City, Trinity Arcade and Piccadilly Plaza. Don’t miss the beautiful and unique London Court for lunch or souvenir shopping. King St offers more exclusive, ‘brand name’ purchases and there is factory outlet shopping at Harbour Town. Visitors are keen to take home examples of the exquisite jewellery made from the stunning opals, mined in Western Australia’s Lightning Ridge.

Like most modern cities, Perth has a vast array of choices for fine dining and casual meals. Outdoor dining is popular and because of the climate, available for most of the year.

The inner suburb of Northbridge offers interesting choices. Its colonial hotels, particularly the famous Brass Monkey Hotel, are extremely popular. The main area is William Street, where you can find every type of restaurant, with Mediterranean cuisine a popular favourite.

Perth’s nightlife is vibrant, and there is the choice of the city centre, Fremantle, Northbridge and Subiaco and other inner suburban locations, where there is a vast range of entertainment venues - nightclubs, hotels, bars, restaurants and cafés.

Excursions and Tours in and Around Perth

Most visitors to Perth put Cottesloe Beach at the top of their ‘must-see’ list. It’s a great place to have lunch – at one of the eateries that take advantage of the sea views all year round by providing all-weather dining facilities.

In Northbridge, you can see many of the reminders of the gold rush era - especially the hotels built to accommodate the miners’ needs. On James Street Mall there is a focus on culture and entertainment - the Western Australian Museum, the Art Gallery and a range of cinemas and performance areas. A visit to the Northbridge Piazza and nearby Russell Square is a must.

The port of Fremantle, just a few kilometres from the CBD, is definitely worth seeing. Some excellent hotels line the foreshore and the atmosphere is one of a beachside resort. The Fremantle markets the western Australian Maritime Museum are extremely popular with visitors.

A large number of international congresses, conferences, symposiums, tradeshows and fairs are held throughout the year in Perth. Not only the highly equipped venues and luxurious hotels, but also the beautiful aura that Perth has, turn the city into one of the most enjoyable places to discover and have a meeting in.