Helsinki's attractions, places of interest, areas to dine and shop are given as well with practical information about the city, here on eventegg. 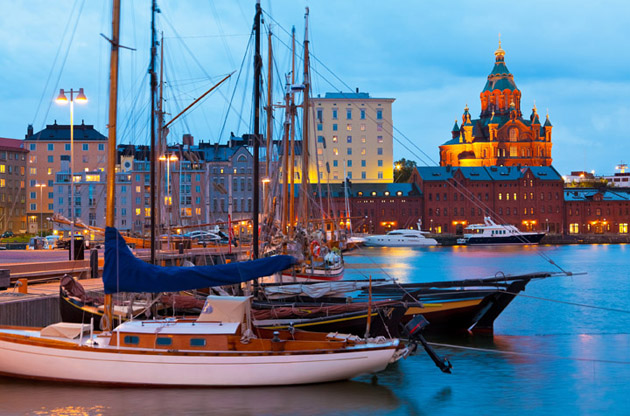 The capital of Finland, Helsinki is actually one of the cities that has been good at keeping the ‘little nice town’ feeling despite serving as a center of culture, politics and tourism. In other words, it is the metropolitan without the stress, crowd and hustle. If the living standards that is higher than at least 90% of the world are also taken into consideration, it becomes clear why Helsinki is one of the greatest destinations to explore.

Also known as ‘The Daughter of Baltic’, Helsinki has got a population of 605.000 that increases to a million when urban areas of the city are included. The city still has the marks of sharing a past with Sweden, from time to time you may hear Swedish while you are wandering in the streets, as it is the second official language of Finland.

Helsinki is a city that impresses the visitors with the architecture and attractions it has. The one of a kind nature in Finland surrounds the city as well. Not much has to be done in order to find a park to rest if you feel tired of walking and taking pictures. In addition, the locals, who are known to be one of the kindest people ever will make your stay even more comfortable and nice in Helsinki.

Now you have the chance to discover this city that the freezing temperatures goes well the most and springs are one of a kind. Don’t be afraid of the cold if you are planning to visit during winter, the cold is easier to deal with than the feeling of never wanting to go back that will hit you on the way to airport to catch your flight back home.

Helsinki is located on southern Finland, on the shore of Gulf of Finland.

How to get to Helsinki?

How to get to Helsinki from nearby countries?

If you are setting out for Helsinki from Russia, Estonia or Sweden, you might as well travel by bus, boat or train.

How to get around in Helsinki?

Helsinki is a compact capital and it is easy to get around on foot. However if the weather condition won’t let you do so, you may consider using the public transport that covers all the parts of the city

Trams, buses and metro are operated by HSL, Helsinki’s official transportation operator. HSL has got an efficient route planner in addition to all the information you may need about prices and schedules.

If you want to hire a taxi that would be good to keep in mind that the prices are regulated by the government in Finland. Weekend and weekdays prices differ. The number of people hiring a cab also changes the price.

Helsinki has got a nice set of churches that represent the skillful craftsmanship and architecture at its best. Lutheran Cathedral, The Church in the Rock and Uspenski Cathedral are 3 of the best examples.

No matter what your destination is, if your trip must include a couple of museums, you are lucky to be in Helsinki. Ateneum Art Museum, Helsinki City Museum and Kiasma Museum of Contemporary Art may be interesting to visit.

Parks and Important Landmarks in Helsinki

Of course, in such a country where the amount of green areas is more than the half of the land, the abundance of parks doesn’t surprise you. Esplanadi Park, Lauttasaari and Central Park in Helsinki are just the right places to enjoy the nature while you are in the middle of a metropolitan.

Sibelius Monument and the Parliament House in Helsinki are worth a visit too, as they are the main land marks in the city.

The ones who have an interest in Finnish and Swedish design will love shopping in Helsinki. However, as I have mentioned in shopping in Finland part, it is not going to be cheap.

You don’t need to do a lot of things to reach the main shopping areas in Helsinki. Pohjoisesplanadi, which is filled up with Finnish boutiques and stores is just at the center of the city. Aleksanterinkatu may be your second address to shop in Helsinki. Torikorttelit is another cute shopping area and there are plenty of cafes and pubs around too.

Don’t be fooled by the tranquil that covers Helsinki in the day. At night, the city may turn into a dance ring. Uudenmaankatu, on the west of the city and Eerikinkatu are the two major areas where the night life is vibrant. Kallio is also well-known with the stylish pubs and cafes, as well as quality bars. Don’t forget to have cocktail made with the legendary Finlandia Vodka.

When it comes to dining, the districts you should write down are Katajanokka and Kruununhaka. Plenty of chic restaurants are standing side by side on these two. If you like sea food, you can visit the fish market in Kauppatori. Eating the freshest of fish and paying considerably less money sounds nice, doesn't it?

Helsinki is a great place to try your favorite sport in a new city. As sports is also an everyday activity of locals as well, it is easy to find the opportunities. Of course, don’t leave the city without trying the famous Finnish Saunas. It is surely the great way to shake the stress of a hectic day. In addition, Suomenlinna, maybe the only town that keeps its unique form in Helsinki, is a fantastic way to spend your day.

It is always easy to visit nearby countries from Finland. Stockholm, the capital of Sweden and Estonian capital Tallinn are in reach by boat. You may also consider going to St. Petersburg, as it takes only 4.5 hours.

The capital city of Finland, Helsinki has been attracting a lot of event attendees from all parts of the world, thanks to the large number of tradeshows, fairs, exhibitions, tradeshows, symposiums, congresses and conferences held throughout the year. The event attendees catch up with the latest improvements and news in relation with their area of interest while also having a chance to discover this epic city.

What to do in Helsinki