A compact yet detailed city guide for Bratislava travelers. Attractions, shopping, dining and excursions in Bratislava are explained by the locals. 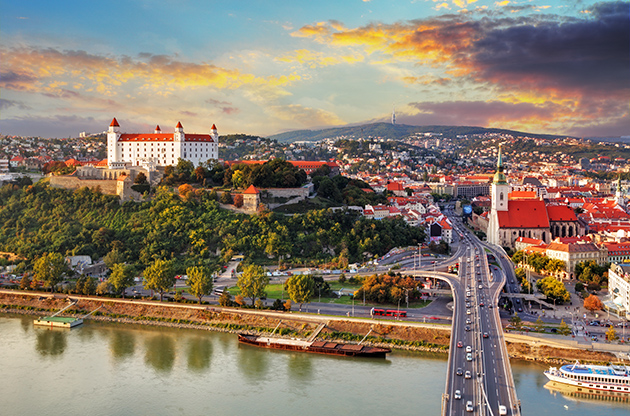 The rich and vibrant capital of Slovakia, Bratislava is a fascinating city with a lot to offer to its visitors. It is the largest city in the country and regarded as the hub of culture and commerce. Every year a lot of travelers visit Bratislava, fall in love with the city and leave with looking for a reason to come back as soon as possible.

Bratislava is located on south west of Slovakia. The population is approximately 500.000 people. It is also the educational center of the country with the most number of universities in Slovakia. With a large number of museums, art galleries, places of interest and major attractions, Bratislava is a city that can be described as the heart of the country.

The deep history of Bratislava is showcased by the remnants of the different nations that affected the city today. Czechs, Austrians, Germans, Hungarians and Serbs are among the nations that played a great role in turning Bratislava into the city it is today.

Your purpose of travel to Bratislava may be either for leisure or for business; no matter for which you visit this beautiful city, you are going to be fascinated by the layers of culture and the deep history Bratislava has. With the tips on Bratislava attractions, sightseeing, dining, shopping and nightlife below, your trip to this beautiful Slovak city will be remembered even long after.

The capital of Slovakia, Bratislava is located on the south western part of the country. It is 60 km from both the Austrian capital Vienna and the Hungarian capital Budapest.

How to get to Bratislava

Bratislava Milan Rastislav Štefánik Airport is the largest airport in the country and located 9 km from Bratislava city center. It is used mostly by the budget airlines that fly internationally however the city is highly accessible by connected flights from a wide variety of airlines.

The official website of Bratislava Milan Rastislav Štefánik Airport gives detailed information about the transportation services between the airport and Bratislava city center.

Since the geographical location of the city is also highly accessible from many parts of central Europe, travelers from these locations may also consider traveling by trains, busses or private cars.

How to get around in Bratislava

Bratislava is a great city to discover on foot. Not much transportation is needed since majority of the places to see are gathered together or located in the center of the city. However, you can also use trolleys or trams, which are the two most popular means of public transportation in Bratislava. Taxis are also available in the city.

Bratislava has got a large number of attractions. The sightseeing in the city must include some of the most iconic buildings some of which date back to very old times. In addition, the museums and art galleries in Bratislava serve great for understanding the culture of the city deeper. It is also a great city to indulge yourself with the delicious dishes from the Slovak cuisine. Shopping and nightlife of Bratislava will also satisfy you; make sure you have some free space in luggage to take the souvenirs you’ll buy and some free time at night to shake the stress away of the day.

Museums and Sightseeing in Bratislava

The museum enthusiast must start their exploration by visiting Bratislava City Museum and Slovak National Museum. In addition, Jewish Community Museum and Pharmacological Museum are the two other museums that visitors stop by in the city.

Bratislava Castle and Devín Castle are two major historical sightseeing points in Bratislava. St. Clare's Church which is used as a concert hall today, St. Martin's Cathedral, Maximilian's Fountain and Mirbach Palace are also popular places of interest in the city. Michael's Gate, Slovak National Theatre, Roland Fountain and Church of St. Elisabeth must also be included in your to see in Bratislava list for a full Bratislava experience.

There are many shopping centers and malls in Bratislava. These are especially popular among the locals since they offer an all-in-one shopping experience. Aupark, Avion Shopping Park and Eurovea are the most famous of these and they are all very accessible from the city center.

If you are after a more authentic shopping experience, then make sure you wander around St. Martin’s Cathedral. There are a bunch of local boutiques and stores that sell some really nice souvenirs and handcrafted items.

Dining and Nightlife in Bratislava

There are many nice restaurants in Bratislava. These serve both classic Slovak cuisine and world cuisine. In addition to the restaurants, there are a large number of cafes and pubs in the city where you can try not only different food but also drinks.

The restaurants are located in Old Town or nearby the Danube shore. This is also the area with the most number of pubs and night clubs, so it is also possible to refer the area as the heart of the nightlife in Bratislava. In addition, Michalska Street in Old Town and Hviezdoslavovo square have got a wide variety of places where you can enjoy some of the most famous Slovak beers.

The attractions in Bratislava never really comes to an end however if you feel like trying something out of the city, you always have a couple of options to choose from.

Bratislava is only 60 km to both the capital of Austria, Vienna and to Budapest, Hungary’s capital. You can take the train to these cities if you feel like discovering another culture when it is so accessible. In addition, Bratislava has many facilities for the adrenalin enthusiast; you can try go karting, quad biking, and even water backpacking in the city.

Mostly because of its central location in Europe, Bratislava has always been one of the cities that host a large number of international events all the time. However, the increase in the number of the events in the city in the recent years however owe a lot to the construction of the venues that are equipped with the latest technology and hotels that can meet every type of event attendees’ needs. If you are on your way to Bratislava to attend an international congress, conference, symposium, trade show or fair, you are going to be very pleased with your new event city.