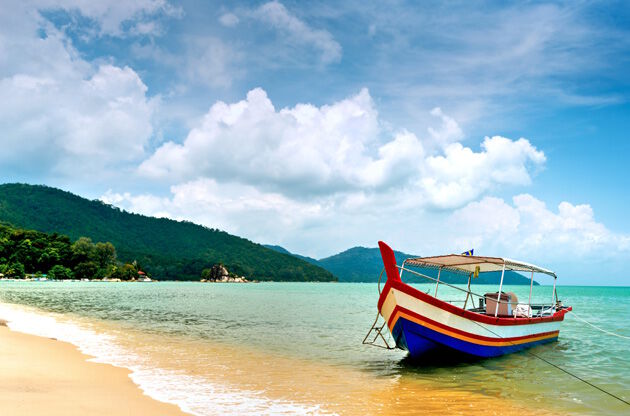 Penang is an island located in Peninsular Malaysia. It is also a state divided into two parts – Penang Island and Seberang Perai, which is the mainland. The name Penang is derived from Pinang. The latter denotes “betel nut tree” in the local language. So when the name “Penang Island” is translated into English, it becomes “betel nut island”.

The first ever given name of the island was “First Island” or Pulau Ka-Satu. In the year 1786, the name was changed to “Prince of Wales Island” for celebrating the birthday of the monarch, George IV. In the middle of the 20th century, Penang was given the distinction of being “The Pearl of the Orient”. Today, Penang is the most populous island in Malaysia and boasts of the third largest economy. People of ethnic Chinese origin are the majority residents here, unlike other parts of Malaysia.

Penang does not just contain popular and rare attractions, but is also known as the “food paradise” of Malaysia! Any tourist travelling to this island has to taste the local food to experience why the island has been given that name.

Apart from the food and the nice beaches, the multi-cultural history of Penang is also something which has shaped the way the island has become now. The multiple cultural influences include Indian, Chinese, European and Chinese. So, if you want to visit a place which boasts of a cultural confluence, Penang is the place to go to. It caters to both business travelers as well as to those who are into budget traveling.

Penang is located on the north-western coastline of Malaysia. It is surrounded by Sumatra and the Strait of Malacca at the west and by the State of Kedah at the north and at the east. There is also the state of Perak lying towards the south of Penang. Some of the most popular islands of Penang are:

Getting to the city is easy as it gets. The Penang Bavan Lepas International Airport is not just the gateway to the city but is also a visual attraction. It is one of the largest airports in Malaysia and is run by Malaysia Airports. The airport is serviced by airlines like Thai Airways, Malaysia Airlines, SilkAir, AirAsia, China Southern, Cathay Pacific and Jetstar Airways. Direct flights are available from cities like Hong Kong, Bangkok, Singapore and Jakarta.

The Penang airport is located just half an hour away from Georgetown, the capital of Penang and there are buses leaving every 30 minutes for taking tourists to the city. The bus service, also known as “Rapid Penang 401E” starts as early as 5:30 am and goes on till 11:35 pm. Exact change is required for paying the fare of the bus.

Things to Do in Penang

Other than enjoying the food and lounging at the beaches, you can also indulge in other activities in Penang. If you want to visit the popular attractions, then there is no dearth of that in Penang. From temples to toy museums, Penang has everything. Georgetown offers most of the sightseeing activities and offers a tempting bus service known as the “Free Penang Shuttle Bus”. Once you hop into this bus, it takes you to all the attractions in the city for free.

Some of the major attractions of Penang are listed below:

The best thing about Penang is that there are no entry fees for various tourist attractions. Other than all the attractions listed above, you can also visit the “Tropical Spice Garden” and the “Butterfly Farm” for free. Other places which don’t charge any entry fee include Pinang Peranakan and the Cheong Fatt Tze Mansion.

Shopping at Penang is one of the must-do activities. Some of the most popular shopping destinations are given below:

This is one of the biggest malls in Georgetown offering a great selection of high-end brands. The mall includes a supermarket which offers the best collection of wine and cheese. So if you are fond of drinking, you know where to buy it from.

This is one of the newer shopping malls of Penang and is located at the center of Georgetown. It is spread over 7 stories and houses a supermarket, a theater and clothing and electronics stores.

This is the largest shopping mall of Penang housing brands like Top Shop, FCUK, Mango, Esprit, Forever 21 and Gap.

Dining and Nightlife in Penang

Dining at Penang is slowly beginning to take the shape of an art form as the local chefs are constantly experimenting with the local cuisine, giving it a more universal appeal.

The top five restaurants of Penang are listed below:

Upper Penang Road, located across the Eastern and Oriental Hotel, is the spot for people who love to party at night. It is a major crowd puller and both tourists and local people flock there in equal numbers. Popular bars like 360° Skybar and “31 at the Mansion” are located here.

Excursions and Tours in Penang

Pulau Aman is a small island located between two bridges. The drive to the ferry takes about 45 minutes from Georgetown. The trip to the island via boat is only of about 5 minutes and the service starts from Batu Musang Jetty at 10 am and every three hours after that. The last boat leaves at 7 pm. The Pulau Aman island is known for the sumptuous food and is also a place for trekking and hiking enthusiasts.