Read the smart advices and tips about the accommodation options, restaurants, attractions and shopping places in Lyon. 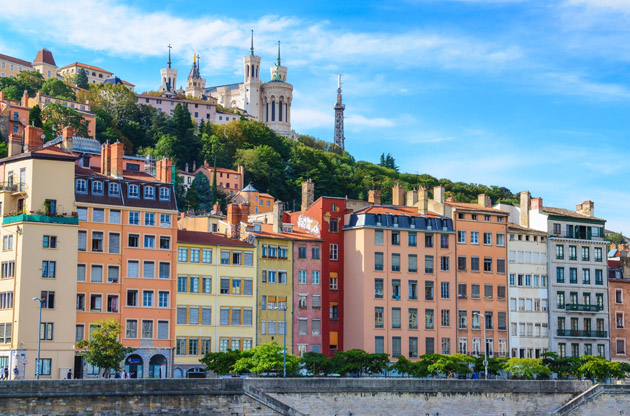 Lyon is one of the biggest metropolitan cities in France. It is also the capital of the region known as Rhone-Alpes. With a rich culture and history; the food, the art and the entertainment; the three key elements of this city that cannot be missed by any tourist that stays here.

The city was established by the Romans and many of its historical sites have been preserved in their original grandeur. Lyon is also recognized by the UNESCO as a World Heritage Site. The metropolis has an ideal location between the Northern and Southern parts of Europe and with its cultural heritage and traditional cuisine; it has become a host to a number of international events and visitors.

Historically, Lyon was a location that was known for its silk production and weaving. However, today, the city is famous as the culinary capital in France. The modern cinema was born here with the creation of the cinematographe by Auguste and Louis Lumière. In memory of the Lumière brothers, the Fête des Lumières (Festival of Lights) is also held each year from the 8th till the 12th of December. This festival has earned Lyon the title of the ‘Capital of Lights’.

The city is known throughout the world as a developed economic and convention centre because of its successful banking and software industries. The chemical, biotech and pharmaceutical industries of the city also hold good reputations in the business community worldwide. The local residents of Lyon are called Lyonnais.

Lyon is located in the Central-Eastern region of France between the cities of Paris and Marseille.

Saint-Exupéry Airport is situated almost 25 kilometers from the city centre and is developing at a rapid pace. The tram-train called Rhônexpress has made transport to and from the airport quite quick and comfortable. The trains provide high class service to travelers and makes stops at the main Lyon Part-Dieu Station as well as at the Vaulx-en-Velin La Soie, close to the districts of Presqu'île or Villeurbanne.

Things to Do in Lyon

Although Lyon does not contain any world famous architectural structures, it’s it offers a wide variety of neighborhoods that can be explored to discover the culture of the area. The best way to explore the city is by means of walking or bicycling.

In the Southern region of the city, the rivers of Rhône and Saône flow on either side; forming a peninsula known as the Presqu'île district. To the west of this district is the Vieux Lyon (Old city) district, which lies at the foot of the Fourvière hill from the time of the Renaissance.

Part-Dieu, the city’s urban centre is located on the eastern bank of the Rhône and to its north; the rich and wealthy of Lyon have their homes in the district known as Brotteaux. Other districts within the city include; Confluence, a modern area developing in a former industrial zone; Guillotière, where most of the immigrant population has its homes; the Etats-Unis Neighborhood and Vaise, a developing locality within the city.

Touring Lyon after dark is truly an amazing spectacle because most of the buildings in the city are decorated with a fine display of lights throughout the year. However, among these structures, the most beautifully decked out, are the buildings of the Lyon University.

While in the city, do not forget to see more than 100 of the painted walls called trompe-l'oeils that are located at different areas. There are also a lot of museums, churches, parks and traboules within Lyon for people who have an interest in discovering the history and art of the region.

While touring the town, visit the Fourvière Basilica on the hill with its amazing views and explore the traboules in Vieux Lyon and Croix-Rousse. The Parc de la Tête d'Or in Brotteaux is one of the largest urban parks in Europe and truly worth a visit.

The best place to shop in the city is the downtown area, where shops are always closed on a Sunday, except in the month of December. The Vieux Lyon district however, has Sunday as its busiest day with all the markets filled with customers.

La Part-Dieu, Rue de la République, Rue du Président Edouard Herriot, Rue Victor Hugo, Rue Auguste Comte and Carré de Soie are some of the shopping areas and stores around town that will provide you everything from fashionable brands to local souvenirs.

Dining and Nightlife in Lyon

Most of the restaurants in Lyon display their menus outside and the traditional restaurants are known as bouchons and they offer some of the best local cuisine. Their menus can include (Lyon Salad), Saucisson Chaud (a hot sausage), Quenelle de Brochet (Seafood Dumpling) and Rognons de Veau à la Moutarde (veal kidneys in a mustard sauce).

All the local dishes are very tasty and if you want to experience Lyon’s gastronomic history, it is a must to try them all during your stay.

Lyon offers a good range of pubs and bars for some night-time fun. The best areas to go to are the Place des Terreaux and the Croix Rousse, where most of the nightlife is seen. There are also many boats on the river that serve as night clubs and bars.

Excursions and Tours in Lyon

The old part of Lyon contains many churches and architectural structures and guided tours can be booked in many different languages from the tourist office. There are also jogging tours available of those who are conscious of their health and if you are visiting the city in the winter, then you can book a day-tour to nearby ski resorts and enjoy a fun-filled day at the slopes!

Being one of the largest metropolitan cities in France, Lyon is known as an ideal destination for business and academic events like conferences, congresses, fairs, exhibitions, symposium and summits. Throughout the year, many delegates from all around the world come to Lyon for reputable global meetings and have a great time also in their free time. Many luxury hotels, remarkable venues and the large spaces for exhibitions and tradeshows strengthen the position of this city as a host city for international gatherings.