A compact information guide about the Colombian city, Cartagena. Find more about the city's attractions, excursions and hotels on eventegg.com 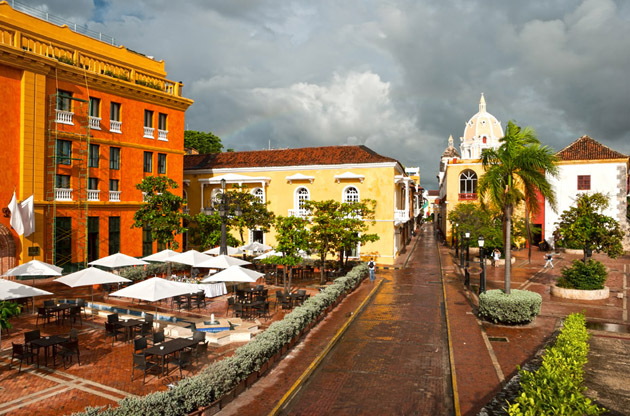 Cartagena (a.k.a Cartagena of the Indies to differentiate it from its Spanish homonym) is a city that welcomes travelers like few others in the world.

Founded in 1533, Cartagena is located towards the northeast of Colombia and set at the center of the Caribbean shoreline. In the past, Cartagena's location made it into one of the most important ports of the continent and, being home to immeasurable riches and prominent people, the city became a fortress in order to protect what lay within.

In 1984, the UNESCO declared Cartagena a World Heritage site because although centuries have past, the city still preserves its history with colonial architecture on either side of pebbled streets and buildings that hold whispers of years bygone. This historicity right at the heart of modern life is a prominent feature that adds a certain picturesque look to Cartagena.

Cartagena's weather holds a year-round average temperature of 30°C that proves a perfect companion to the refreshing breeze of the Caribbean Sea. Its people are beautiful and friendly. Through the ages, this encounter of different peoples with different cuisines gave birth to an exquisite and exotic gastronomy that uses predominantly seafood, fruits and vegetables in Cartagena.

Cartagena plays host to major cultural events every month —Feb./March: The International Film Festival; June/July: The Summer Festival; November: Popular Festivals— and this, alongside its vibrant nightlife, transforms it into a place that will make you think twice before leaving.

Your trip to Cartagena will change your notion of beautiful cities and you will consider you top cities list once again. Cartagena waits to be discovered, this time by you, with all the beauty and natural treasures it has.

Cartagena lies on the northern coast of Colombia.

How to get to Cartagena?

Rafael Nuñez International Airport is the airport you will be using and once you arrive, you can choose to hop on one of two types of buses (with or without air conditioning) or get a taxi to go to the city center. Buses have their fare on display and cost a us dollar or so –$1500 or $1900 co pesos, while taxis costs between $5 and $6 us dollars –$9,400 to $10,400 co pesos, the last price is for nighttime and if the air conditioning is in service. An airport-downtown taxi fare should never exceed $12,000 pesos.

Once you set your feet on the heart of Cartagena, it is better to keep using them. Move around on foot in order to be able to appreciate fully the historical center. One of the best things of Cartagena is that you can get fresh juice and delicious exotic dishes almost anywhere while on your way to visit the different touristic spots. Take into account that there are TIPs (Touristic Information Points) downtown, where you can get maps and detailed information about Cartagena.

After a day of walking from one spot to the next, and enjoying the different landscapes that offered, there is nothing better than a fine dinner and entertainment. As mentioned above, Cartagena’s cuisine is the result of a multicultural blend of flavors, scents and spices; and so is the case of its colorful nightlife! Here is a quick list of places to eat and party at.

Before bidding good-bye to the beautiful Cartagena, you might want to take a look at some shops and get souvenirs for yourself and your love ones. Within the fortified walls of the historical city center, from the bulwark of Santa Clara to the bulwark of Santa Catalina, you will find what the locals call “bóvedas”; these vaults have been turned into shops, most of them specialized in Colombian handcrafts such as the traditional sombrero vueltiao (turned hat) and purses made out of the same natural fiber.

Cartagena is becoming one of the most important cities in the world's event tourism scene. The number of international congresses, conferences, symposiums, seminars, fairs and tradeshows held in Cartegana has increased significantly in the recent years. The accessibility of the venues and the quality of the hotels in Cartagena, turns the city into a convenient place to host these large scale events. The historical richness and the soul of the city are the other pros for the event attendee as Cartagena offers one of the most interesting and sophisticated travel experience.