A different European aura is not the only thing Portugal has got to offer; you can also travel into a fairy tale by visiting the magnificent town called Sintra.
25 Mar 2015 | Birce Altay | portugal, lisbon, porto, sintra 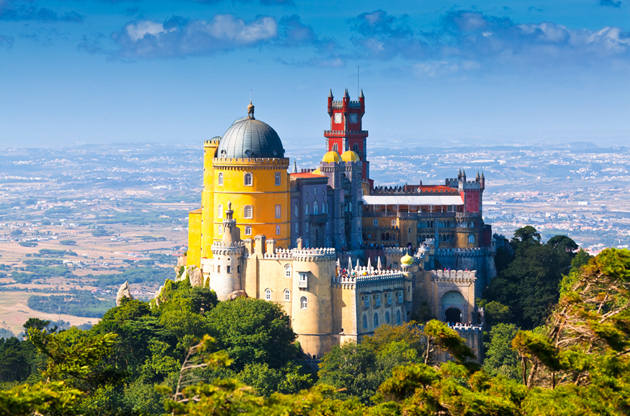 Portugal is one of the countries in Europe that truly has got a characteristic atmosphere. Porto, for example, is a city whose aura captivates you once you start wandering through its streets. The international fame of its port wine, its beautiful streets, local dishes and warm blooded people just add to the charm of the city. Lisbon on the other hand, is the cultural hub of the country where one can both feel and witness the denser European touch. Discovering the exciting Bairro Alto, admiring the beautiful tunes of Fado and getting lost in the narrow streets of the city are only some of the thing that’ll be remembered after a quality time spent in the city.

It wouldn’t be wrong to assume these two cities are the most well-known and the most visited ones by the visitors who want to indulge themselves with the Portuguese treats. Still, there is one another place that pictures something totally different from the rest of country and guarantees a travel back in time: Sintra.

Sintra is a town and municipality located just 28 km outside Lisbon. It is one of the places among the UNESCO World Heritage List, not only because of the castles, museums and churches that look like they have just came out from a fairy tale, but because of its importance in the Portuguese history. It is a perfect get away destination for the travelers of Lisbon, if they ever feel like they have seen enough of the city and want to get lost in a picturesque place.

The early settlements in Sintra date back to Neolithic. After the Roman occupation which started in mid 2nd century BC, the remnants which can still be seen today were the works of Moorish, who are the first to be mentioned in the first written settlement documents of Sintra. After the conquest of Lisbon in 1147, Sintra has gone under the reign of King Afonzo Henriques. The Royal Palace in Sintra was built during his reign and the palace served as a summer residence until the end of the 16th century. By the 19th century, the place had already begun to attract the upper class Portuguese people who ended up building exquisite residencies for themselves.

How to get to Sintra?

It is very easy to get to Sintra from Lisbon. The train that leaves every 20 minutes from the Rossio Station in Baixa will take you to Sintra in around 40 minutes. The one way ticket for the train ride costs 1.40 Euros as of 2015.

Places to see in Sintra

Sintra is a great destination for the day trippers who make it early in the morning to Sintra because there are so many things to see there. Make sure you wear some comfortable clothes and accompanying shoes because you will be doing a lot of walking which will turn into hiking from time to time. After reading about the places you can see Parques De Sintra for additional information about the opening hours and fees. 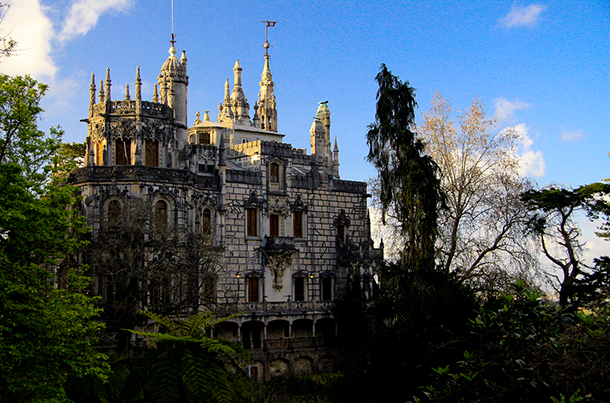 Regaleira Palace is one of the places that should be included in your list of must see places in Sintra. There are proofs of the palace’s being built in 1697 however it was not until 19th century when it the palace and the gardens were used. The Gothic, Manueline and Renaissance touches of the palace were added by Luigi Manini, an Italian architect who was asked to renew the property by Carvalho Monteiro, the man who made huge fortune in Brazil and bought the place in 1892. It is one of the most fascinating stops in Sintra to admire the beauty and the glory of the architecture which is accompanied by one of a kind nature. 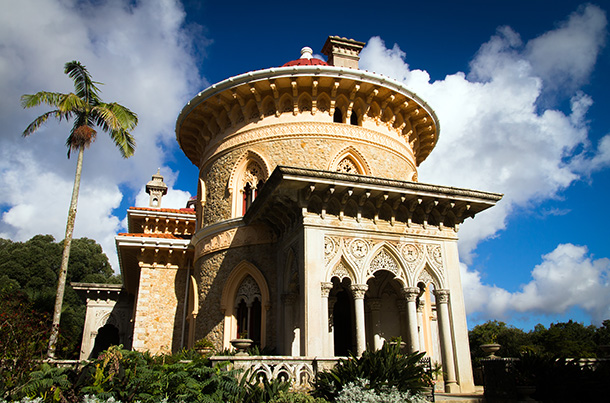 Monserrate Palace and Gardens must definitely be visited by who wants to get to know one of the most fascinating creations of the Romantic period in Portugal. The way eclecticism reflected in Monseratte Palace is unique and one cannot simply leave the gardens and the palace itself without falling in love with it. It is possible to come across not only Gothic and Indian but also Moorish touches on the castle’s architecture. The Monseratte Garden is home to a large number of plant species that has been gathered from notable parts of the world. 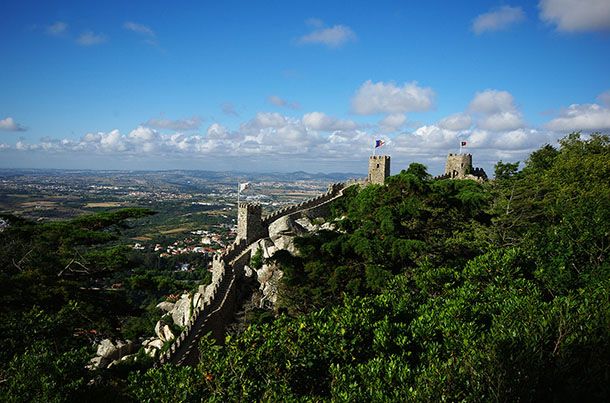 The Moorish Castle is located on Serra de Sintra and offers the visitors a breath taking view. It was built around the 10th century after the Muslim conquest. If you feel like hiking, the road that leads to the Moorish Castle is a great option because the road that leads there goes through the forest which is filled with every shade of green you can possibly imagine. However, bear in mind that it takes almost 1.5 hour to reach there on foot from the Sintra center and the hiking route contains some steep steps. 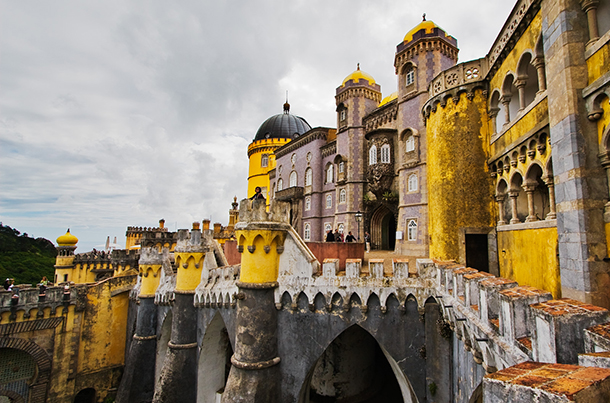 One of the most iconic places, not only in Sintra but also in Portugal, Pena National Palace’s roots date back to the small chapel that was built for Our Lady of Pena in the Middle Ages. In 1493 a monastery that could house 18 monks at a time was built with the order of King Manuel I. However, the monastery damaged badly by a lightning and after the Great Lisbon Earthquake of 1755. The remains stayed until 1838 when King Ferdinand decided to get the monastery re-build and transform the place into a castle for the Portuguese Royal Family. The Romantic style rebuilding gave the castle the picturesque look it preserves even today. The palace hosts important governmental meetings from time to time today. It is also possible to get inside the palace where you can see the room of Kings and Queens, the common rooms and even the kitchen of the palace with the utensils that date back to when they were actually in use.

These landmarks of Sintra may be the most famous and notable ones however not the only ones that deserve a visit. Other than these, National Palace of Sintra, Chalet and Garden of the Countess of Edla, Convent of the Capuchos and The Portuguese School of Equestrian Art are among the other places of interest in Sintra that will make you agree with Lord Byron, who once wrote “perhaps in every respect the most delightful in Europe” for Sintra.